Back in the late 1990s, I started trying to write a biography of William Hayley (1745-1820), man of letters, amateur doctor and champion of women’s writing, and someone whose private life was, shall we say, interesting. I tried to write his biography, but although there was a fascinating tale (many fascinating tales) to draw out, no matter how I tried to organise the material, the structure always felt arbitrary. There were too many stories, ideas and people to explore. Too many paths to digress down in ways that would simultaneously enrich and undermine the narrative.

The project was relegated to the back-burner part of my brain where it bubbled away quietly along with several other semi-formed ideas.

A few years later, inspired by Tim Wright’s In Search of Oldton (2004), I started thinking about making the biography as a digital thing, telling Hayley’s story in jigsaw, rather than linear form. The codex is a fantastic storytelling technology, but it’s not omni-appropriate, and I felt that a new form – one that allowed for a more flexibly-structured and variable reading experience – might better suit Hayley’s life. And not only Hayley’s life. There was, I thought, something about the structural and ordering affordances of digital technologies that could enable auto/biographers and memoirists to make life writing more congruent with the felt experiences of living and remembering.

Years of occasional discussions with bright and imaginative people followed. Some loved the idea, others dismissed it. In the meantime, I was lucky enough to be offered opportunities to write and speak about developments in digital literature in a variety of contexts. All these, together with rapid developments in technologies and their adoption, and a failed Unbound project, were vital in growing my initial seed-of-an-idea to a point where it was, potentially, realisable.

But I couldn’t have created it myself. I can’t code, and knew I wouldn’t have the time to develop sufficient skills. Luckily, I met developer and entrepreneur Michael Kowalski. Twice, with an eighteen-month gap between meetings. At our first encounter, he expressed interest in the project. At our second, in an astonishing act of generosity, he offered to build it for me.

We started work early in 2013. Almost a decade after I’d first wondered if…

By this point, and with the benefit of several other people’s wisdom (especially Sue Thomas, Chris Meade and John Mitchinson), I knew I wanted the Hayley biography to enable readers to get to know him in a way that mimicked encountering him in real life. This meant 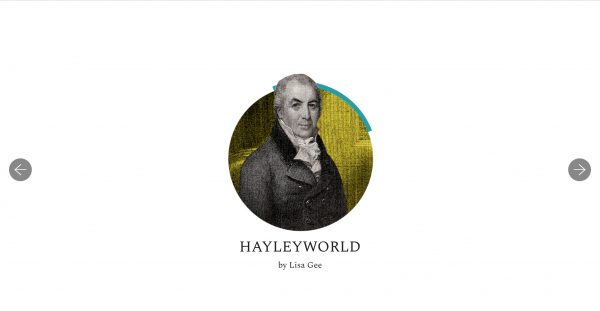 William Hayley wrote his Memoirs in the third person. I decided to base HayleyWorld around a series of extracts drawn from the book’s 700+ pages. It soon dawned on me that, if I wanted to simulate a relationship between readers and Hayley – which, in effect is what it means for the reader to get to know him in a way that mimics encountering him in real life –  I’d need to edit these extracts into the first person. Meanwhile, I planned to confine my biographical contributions (literally) to the margins. To give you a sense of scale, HayleyWorld includes some 420 extracts from Hayley’s Memoirs and other autobiographical works, about three hundred of which feature my commentaries – short encyclopaedia-style pieces putting Hayley’s words into context.

These decisions forced me to recognise that the biography would include elements of fictionalisation.

Did that mean it wasn’t a biography?

I didn’t want to write a novel.

There are, writes Sergei Averintsev in Mapping Lives: The Uses of Biography (edited by Peter France and William St Clair), two words in Greek meaning life: bios and zoe. “The latter denotes vital energy …  the quality of being alive”. Meanwhile, bios means “mode of life, manner of living, often what we name ‘conduct’ or ‘behaviour’.” HayleyWorld, I decided, was a zoeography. It would have the vital energy of Hayley’s life, all the information it delivered would be factually accurate, but the method of delivering that information – William Hayley addressing/interacting with his readers directly – would include elements of fictionalisation. Given that he’s been dead for nearly two hundred years, the location of the fact/fiction divide would be obvious.

Soon after Michael and I started work, I realised HayleyWorld needed an academic underpinning. I was basing it on the assumption that people read biographies to get to know the people they’re written about. Was that true? I couldn’t find any empirical research investigating why people read life writing and what they get out of it. And I also realised that I didn’t know how people get to know each other. Luckily, an opportunity arose to do a PhD in Digital Writing by Practice at Bath Spa University. Which – as well as being a wonderful life-enhancing experience – proved indispensable in ensuring that the thing got built.

So, what were the biggest challenges I faced when it came to actually structuring, writing and editing HayleyWorld?

While working on the project, I was also getting divorced, earning a living and being mum to a teenager. Meanwhile, Michael was running a company, then selling it and embarking on a new venture. I was unable to devote as much attention as I would have liked to HayleyWorld, and Michael’s time was at a premium. Whilst sometimes frustrating, this – combined with working on the project over a part-time PhD timescale – also turned out to have advantages. It meant HayleyWorld could develop slowly and organically. Ideas that were initially fuzzy and difficult to pin down sharpened into focus, almost of their own accord. It felt like my brain was getting on with the work by itself while the rest of me was dealing with other things. Bizarrely, this making HayleyWorld feel like much less effort than I suspect it would have done had I been able to work on it full time.

This elongated timeframe was particularly helpful when it came to mapping out the reader journey.

I always knew that this would be the most mind-bendingly challenging aspect of HayleyWorld.

Editing the extracts from Hayley’s Memoirs into the first person and writing the accompanying commentaries was demanding and extensive work, but the “how” of doing it – the process – was straightforward. Designing the reader journey was anything but. How should the extracts be grouped into different topics? What should those topics be? What should we do with extracts that fitted into more than one topic? How should I deal with repetitions and holes in any narrative introduced by my choices or Hayley’s? And what did narrative mean in what would become, if not a non-linear telling, at least a multi-strand, multi-linear one?

I spent a lot of time developing the algorithm for the reader journey. The first version looked like this: 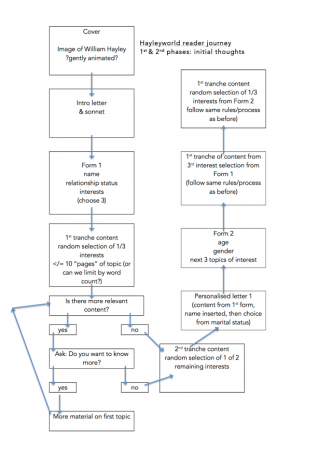 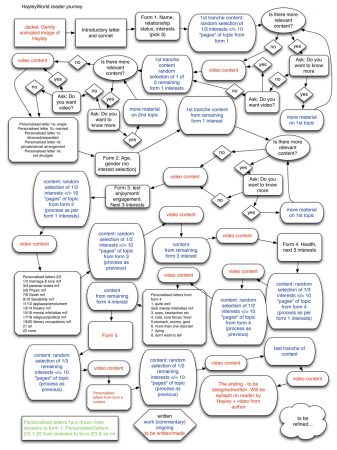 By the time I got to the point of making, it looked like the second illustration. And this isn’t the final version. I never drew that. It turned out to be less complex for two reasons. The first is that I didn’t end up including the video content I refer to in the diagram. And secondly, using intertitles removed the need for Hayley to ask readers if they want to read more on a particular topic. At the bottom of each intertitle page, he simply suggests that…

The mapping process was, inevitably, time-consuming, but a lot of that time was spent lying down in a darkened room muttering expletives.

The final version of HayleyWorld is divided into twelve topics. Hayley asks the reader six sets of questions and, in return provides them with four personalised responses, the last of which has 1,800 possible permutations. And I don’t feel that this aspect of the work is, as yet, complete. When/if the work finds a publisher, I will persuade Hayley to ask more questions, and respond in his typically sympathetic way to his readers’ answers.

This video provides a short introduction to how the reader journey works at present:

Ultimately, to provide what Nicholas Lovell, in his forthcoming book The Pyramid of Game Design calls “the session-length promise” (this “refers to the player’s expectation of how long it will take from tapping or clicking on the game icon to have a meaningful experience in the game”), I divided the 12 topics into chapters. On my PhD supervisor, Ian Gadd’s, suggestion, each chapter is introduced through an illustrated intertitle page.

It was only when I was finishing the thesis part of my PhD (submitted to accompany HayleyWorld) that I realised I was so firmly embedded in the paradigm of the book that I’d missed an alternative way of organising my material that would have been more congruent with my intentions in making the work. If I wasn’t so book-bound, I could have abandoned the idea of topics, and, worked from an extended version of the questions Hayley asks readers about themselves, delivering and personalising all the content on the basis of their answers.

On the upside, it’s likely that many of HayleyWorld’s potential readers may be trapped in this bookworld with me. And, hopefully, my failure to escape this paradigm will mean HayleyWorld feels familiar and accessible to them.

Lisa Gee is a post-doctoral research associate working on the Ego Media Project at King’s College London, and in the Fitzwilliam Museum, Cambridge University, where she’s researching and cataloguing the William Hayley Papers. If you want to know more about or read HayleyWorld, tweet a request to her @LIS4G33

Creating immersive audio stories for people with Parkinson’s disease
I have worked as a dramaturg and theatre maker for over 20 years, spending my life thinking about how to create stories for  audiences to lose themselves in. My professional toolbo...
Words: Foundation Bricks in a Media Warehouse
The creation, presentation and publication of new creative work has been a core element of undergraduate teaching programs at Queensland University of Technology for over four deca...
The Fantastia Express
This is an article about an augmented reality practice-based research project, The Fantasia Express, commissioned by the UK Department for Transport through an InnovateUK competiti...
Enhanced audio stories for city wanderers
Falling into the Story(World)  Don’t you love that moment when you fall into a storyworld? The magic of storytelling relies on the  power of words to create the world you visit ...
Reading on a Revolving Path
I set out to make ‘A dictionary of the revolution’ in 2013. I planned to record conversations with different people, asking them to define words I heard people using to talk about ...
Hands Up for Digital Humanities – Find the Gap
Welcome to the third article in this series where we’re dissecting the multifarious entity of Digital Humanities (DH). To understand the context and scope of this series, and to co...