The Book of Hours
by Lucy English

A book of hours describes an anthology of illustrated sacred and devotional texts, popular in the middle ages. Divided into the canonical hours, they contained psalms, prayers and gospel extracts and were designed not to be read in sequence, but rather to be consulted as per the calendar. These were books developed for lay people who wished to incorporate elements of monasticism into their devotional life.

The Book of Hours is an anthology of poetry films, collaborations between poet Lucy English and filmmakers from around the world. Thanks to handheld devices and the ubiquity of internet connectivity, it can be carried in a reader’s pocket and consulted at any time of the day. Divided (roughly) into the canonical hours, it serves the current film based on the time in the reader’s location. Though very much secular, the structure of The Book of Hours recalls the same contemplative mood that its sacred counterparts no doubt inspired. 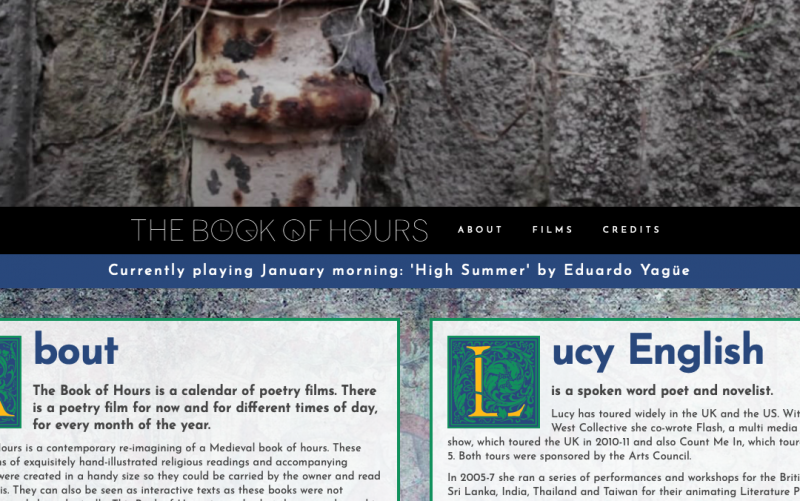 Being film-based means that such contemplation can never be silent, though, and there is no option to read the texts, either independently of the films or inline as closed captions. However, this does not ultimately detract from The Book of Hours as a beautiful and reflective experience. Its navigation and design are never intrusive and the poems are well matched to the accompanying visuals.

Simon Groth is a writer and editor whose works include Infinite Blue (with Darren Groth) and Hunted Down and Other Tales (with Marcus Clarke). He currently completing work on Ex Libris, a novel where every copy contains a unique order of chapters.