Paper Nations, a South West England-based creative writing incubator dedicated to diversity and innovation, has commissioned three writers with links to the region to develop exciting and experimental writing projects that use smartphone technologies to tell immersive stories. Paper Nations is led by Bambo Soyinka, Professor of Story at Bath Spa University.

The “Beyond the Book” commission, led in partnership with The Writing Platform’s co-editor Kate Pullinger, aims to develop innovative models for writing and publication, promoting dialogue between writers, technologists and new publishers. By supporting writers to work with technologists as part of a commission, Paper Nations is helping early-stage experimental writing to flourish. This will lead to a body of research into how to support and champion emerging digital writers, which will be shared both nationally and internationally.

In February, our three commissioned writing teams were beginning their projects. They each gave us an update on this early stage as they balanced story and technology with their wider ambitions of what they wanted to achieve through the work. They are all now in the middle of their projects and we have caught up with them again to see how they have been progressing, particularly during the national lockdown in the UK due to Covid 19. We will check in with the writing teams again in a couple of months as they reach the end of their projects.

Lucy Christopher and Rajiv Edward, a writer and technologist team, have been commissioned to develop “The Fog”, which uses smartphone sensors, such as geolocation, to tell a story about a mission to save Bath from a time-freezing fog.

It seems that a nationwide lockdown isn’t bad for all projects, not if the two project partners live together already at least. In fact, Raj and I used some of the lockdown time to do a lot of thinking about our digital project, The Fog, and to do a lot of talking about it too. Crucially, we feel like we have made some big leaps forward. For example, we have a structure for the project finally; something that had been evading us for months and causing me, as the primary writer, many headaches. Now, it feels like we know what we are doing in regards to the story arc and what we are trying to achieve. But, perhaps most crucially, we are starting to build the story on a digital platform. We have a prototype for the first 5-10 minutes of the digital consumption of The Fog. We can see it coming together. It’s exciting.

So how have we got here? Well, Raj has been busy learning ‘React’, a Javascript library, in order to help with the technical build of The Fog, while I have been scribbling on lots of bits of paper trying to work out where parts of this story should go to make the most sense.

It’s so different writing this to working on a novel. I have to think more about structure, and I have to think more concisely – two things that don’t necessarily come naturally to me as a novelist. I’ve always been the kind of writer who likes to feel my way into story. This is harder to do in this medium – Raj can’t necessarily feel his way into building a digital platform and me working intuitively like this will inevitably cause more work for him. I’ve learnt that a more accurate road map from the start is needed; a more accurate purpose and idea of where we want to take it. 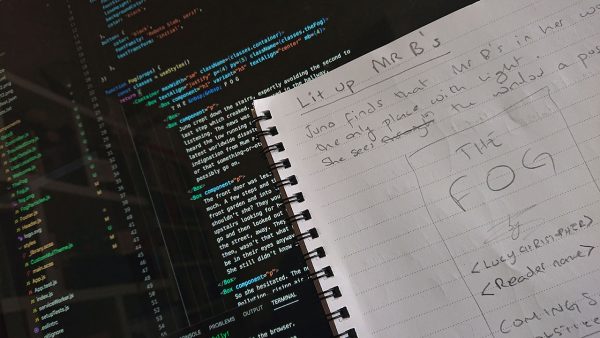 There’s still loads of work to do. I need to write the rest of the text, and make sure the components of the story arc are still thought about carefully. Raj needs to do loads of super tricky building and coding to make The Fog look pretty and exciting on the screen. We are still very much in the foggy middle of The Fog, but at least now we can see a little more clearly to the other side.

Writer Lucy Telling is developing “The Wallet Chapters”, which will use e-tickets accessed within the Wallet app, on both Apple and Android, to create an overarching story inspired by the information supplied in the tickets (dates, times, locations and other details).

It’s fair to say that the world has changed since my first blog post. In the lead up to the Coronavirus crisis, I made good headway with regards to developing the technology for The Wallet Chapters, and the story I want to tell.

Back in January, I was occupied with questions relating to the possibilities and restrictions within the Wallet application. At this mid-way point, I feel I now have answers to many of those questions and a much clearer understanding of the parameters within which my story will sit. This is important in relation to the narrative I am writing, but it also allows the concept to become a platform, which could be used for multiple different stories in the future.

Your Wallet is full of tickets, which allow for a range of locations, modes of transport and events. A quest story, therefore, fits well. Initially, I imagined the story would span a period of ten years, but I now know it’s not possible to add tickets retrospectively. So, I have decided the story will be contemporary and delivered in real time, probably over the course of a week or two.

Each ticket sets the scene for each new chapter. When a ticket is available, as a reader, you receive an email with a link to download it into your Wallet. The layout relates to that particular ticket, so it looks like a train, event or flight ticket. This gives basic info about the ticket, but no story. When you turn the ticket over (virtually) you will be able to access a back page where you will be able to read a text synopsis of the chapter and further content via web links.

There are various options regarding the links. For one, this offers the opportunity to add audio, so it is possible to listen to a full version of each chapter. I imagine this will be a location recording made by our protagonist describing each event just after it has happened. The links also offer scope for additional content that could add finer detail, depth and texture including audio recordings of (fictional) overheard conversations, Youtube videos and links to existing websites that could be woven into the story or (perhaps in future iterations) fictional websites.

The story revolves around what Alfred Hitchcock termed the “MacGuffin” – a mysterious object that sets the chain of events in motion. The object itself, although central to the story, is largely unimportant in itself to the reader, but of utmost importance to the main characters. The first chapter is a train ticket. Our protagonist has just had an unnerving encounter, where she helped a homeless man who had collapsed outside the station. Moments before he was taken away in an ambulance, he gave her something and asked her to return it to “Virginia”. He leaves before she has a chance to ask him any questions.

The story revolves around this intriguing object and his instruction, which, over time, becomes her mission – to carry out what ends up being his last wish. In her quest to discover more about it, she finds herself in new and increasingly weird situations. A series of coincidences lead her to believe she is on the right path. She feels compelled to follow, but becomes mixed up in a strange, dark world that causes her to question her own life choices and, at points, the nature of reality itself.

Writer Melanie Frances is producing “seer”, a reader-led interdimensional journalistic investigation where readers will act as the protagonist, a journalist who is investigating a new technology that claims to allow people to see into alternative dimensions.

I both love and hate the middle of a project. I find that it is here, in the middle, that you really get to grips with what your piece is doing, what it is saying and with the experience you are creating for your reader.

In a non-linear, interactive project like this, in the middle of a process you begin to step into the middle of what you have created. I have the stories, the routes and journeys, the characters and moments, the hundreds of post-its surrounding my office walls. Now I begin to shape what I have made. I reshape and refine – see where to push and pull and what needs more or less.

Central to seer, the piece I’m making, is the idea that two people can look at the same information, the same stimuli, and understand two different stories – that our perception and our perspective shape what we believe to be real and true. The experience of this difference, of the multitude of ways we can put together information to build a narrative, is an experience that lies not in words but in the gaps between them, the connections we draw – in what is left unsaid between two people, the discrepancies between one account and another. To tell a story of many perspectives, you have to tell a story in the gaps.

seer is experienced on a website that presents the reader with an archive of information to search through. The reader plays as a journalist and to progress they have to ‘publish’ stories, making choices about what information they think is important, and what they want to know more about.

Now that the website is up and running, I am getting a sense for the first time of how the reader will experience the world of my piece, what it means for them to guide themselves through the narrative and make choices. In this moment I centre my audience, and begin to understand our conversation. It is a conversation of perspectives and perceptions, a conversation that lies in the gap – the gap between what I’m saying and what they’ll say back.

For more details on Beyond the Book and the writers visit Paper Nations.

Lucy Christopher and Rajiv Edward are a creative and real life partnership interested in all the possibilities that digital storytelling presents. Rajiv is a Frontend Web Developer and UX designer who works at the University of Bath, and is looking to push further into app development. Lucy is an international bestselling Young Adult author, including novels Stolen, Flyaway, and Storm-wake. Her books have won the Branford Boase Award, the Printz Honor, and have been shortlisted for the Costa and Waterstones prizes. Lucy also works as a senior lecturer. Through her work leading the MA Writing for Young People at Bath Spa, she has helped to kickstart the careers of many writers who have gone on to have several books published themselves

In 2009, Lucy Telling co-founded Stand + Stare, an interactive design studio, with her brother Barney. Since then, the Bristol and Stroud-based writer has worked on numerous creative projects, including a recreation of two sets from The Muse by Jessie Burton, using touch tech to trigger audio extracts from the novel in 2018. An extensive list of her projects through Stand + Stare can be found on their website. Lucy is also an award-winning playwright and film-maker whose work has been performed across the country, both in theatres and schools.

A writer with many hats, Melanie is a theatre-maker, artist, game designer, and mathematician who is also Co-Artistic Director of digital, interactive performance company Produced Moon. She has authored several app-based works, including The Inventor’s Squad, an audio guide that tells the stories of female scientists, mathematicians, engineers or inventors, such as Ada Lovelace and Hedy Lamarr.

Paper Nations is a creative writing incubator. We commission writers throughout the South-West of England to create new work, we nurture local communities of support for writers, and we create multi-channel partnerships to showcase new writing internationally.