A novel of mine had come out in 2011, and another in 2012, and now I was supposed to sit down and start another? I bridled. The solitude of novel writing, the grating solipsism of the form – strapping yourself alone to the industrial word loom – felt oppressive. Writing a novel at that point seemed like wallpapering a dungeon. In short, I was lonely.

Reacting, I sought to make my writing life more collaborative, to spread my wings in other fields. I co-wrote a screenplay, which got made into a film. Inspired by some amazing work, I ventured into digital literature with an app, Reptile Resistance, written collaboratively and crowd-funded via Unbound. I started teaching writing more, and lecturing on the Publishing degree at Oxford Brookes University. I was mitigating the loneliness of writing long form prose by collaborating in a broader suite of texts and activity.

Still, although the prospect of writing a novel was oppressive, I really did have a story to tell and I knew that sooner or later I’d have to overcome my resistance to the loneliness of writing in order to tell it.

My friend Mark solved the problem. I told him about the tribulations of the word loom. Also, because of working at Brookes, I’d been thinking more about scholarship, specifically about how early drafts of contemporary books – once upon a time hand-written or typed – were now just being written over, dissolved into the rolling palimpsest of computerised text.

Mark solved both issues in a stroke. ‘Stick a bit of malware on it.’

‘Stick some spyware on your computer.’

He meant that if I put some malware, or spyware, on my computer to note everything I did, it would record all changes made to an evolving manuscript, plus it might offer a weird kind of company for me in my wallpapered dungeon.

So, in April 2013 I approached the digital curation team at the British Library, offering myself as a guinea pig, offering to have a piece of spyware put onto my computer to track the writing of a novel – every wrong-turn, reappraisal, edit, mistake, not just recorded, but time and date stamped. Immediately, the British Library saw the scholarship possibilities in what I proposed and we negotiated a contract where (to put it crudely) the data was theirs but the resultant book was mine.

It became quickly obvious that to save us from running into privacy issues, I would need a separate machine on which I only wrote the novel. That was no problem. I’m not the world’s richest guy so I bought a pretty basic reconditioned laptop and used only that. 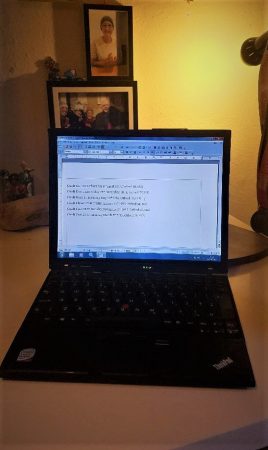 The curation team chose a piece of keylogging software called, Spector Pro about which Jonathan Pledge, a curator of contemporary archives at the British Library has recently written:

After installation on a host computer, Spector Pro works by running undetected as a background application and cannot be accessed via the normal Windows user interface (it is not visible in the Applications folder). Access to the programme is by a default keyboard combination Control-Alt-Shift which brings up a password dialog box. The password is set by whoever installs the programme.

As keylogging software Spector Pro is not terribly sophisticated and seems to have been specifically designed for low-level company surveillance of employees, potentially without their knowledge. It is possible to run Spector Pro as a visible programme but this would seem to negate its original stated purpose.

Spector Pro can track and record chat conversations (as transcripts), emails (sent and received), websites visited and, most importantly for this project, keystrokes made, not only what has been typed within an application; but mouse and keystroke usage across the whole computer system.

I visited the library and had the software installed on my empty computer and I set to work. Over the next 42 months, while I laboured through what turned out to be a very difficult novel, I visited the British Library on eight separate occasions, to allow them to download the data. My last visit was March 2018.

So, what do we have?

We have information on keystrokes typed: 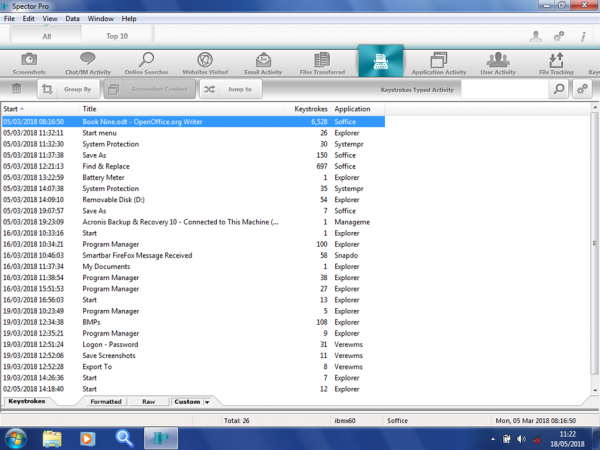 This shot shows the raw data usage as a list. By far the largest number of keystrokes concerns writing/typing as well as work on editing (Find & Replace) with the remainder comprising system activity including backups.

And we have thousands of screenshots, one captured every few seconds each time activity on the host computer is detected.

From the moment the computer is logged into until the moment it is shutdown. Screenshots allows an output as either still images (.jpg or .BMP) or as black and white video (.avi). 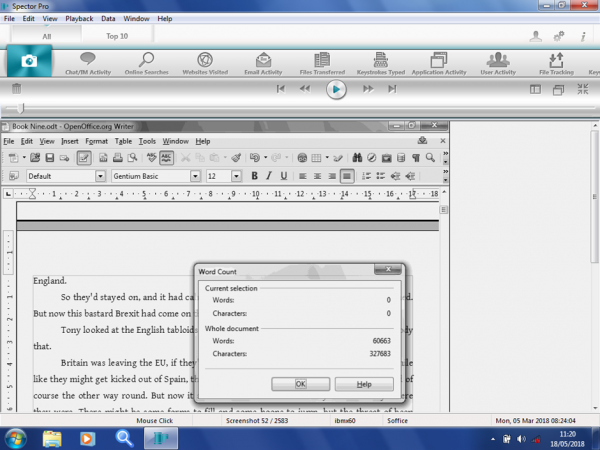 And we have text outputs: 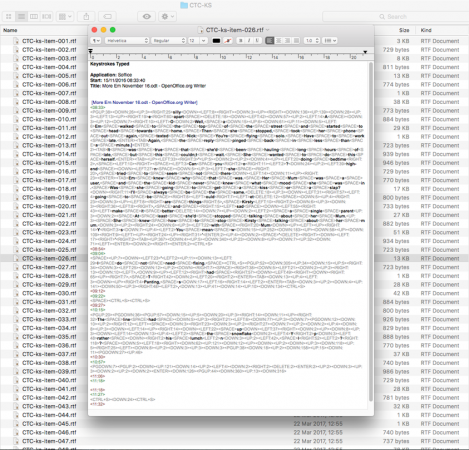 Text output from ‘Keystrokes Typed’ for a single tracked session. As seen from the detail below the header provides information on the Application used, the start of activity and the title of the file being worked on. The greyed text represents the tracked movements with typed words rendered in bold. Time stamps are given, with the green text signalling the start of activity and red the end. 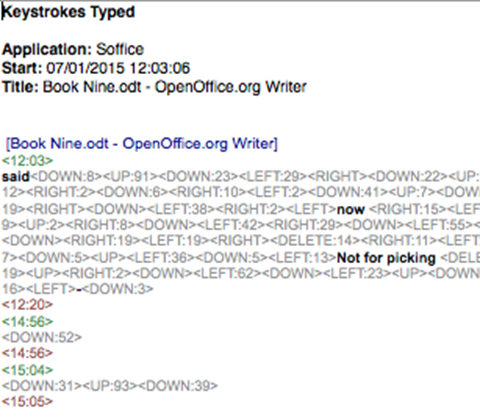 What are we going to do with it?

Well, I’m not going to do anything with it, I don’t have the skills or the motive. But the data is out in the public domain now, under a Creative Commons BY licence, running free here.

But if you are a scholar of digital humanities, or a digital artist or creative visualizer, be my guest, see what you can find to do with it. The data is there to be played with.

During the writing I never asked about the data, about what was going on ‘under the hood’. I had no access to the software on my computer and I had no sense at that time exactly what it was recording. And while I never knew what it was doing, it helped with my problem. I managed to start again, by making the practice of longform fiction into something that felt collaborative, not only because the software was sat there recording, but also because of the digital curation team who were taking the data.

I have been asked if knowing that the work was being recorded made me self-conscious, and, sure at first, I was minding my Ps and Qs a bit, trying to seem like a more competent writer than I was. I remember at one point I even looked up the spelling of a word on another computer so that I could type it correctly into the spyware computer.

But that didn’t last. I relaxed and soon I actually quite wanted my mistakes to show. It seemed like an act of solidarity with the writers I was teaching, to show them what I had often told them, that writing is born from repetition, that every writer has blind spots – shonky spelling, flimsy characters, poor plotting – and that only re-writing cures. It seemed generous to show the tottering beginnings of what most people would only consume as the finished article.

But not only that. I forget about the keystroke software recording my every move because of the story itself. I wrote earlier in this piece that it was a difficult novel to write, and that was because I aimed to write as simply and truthfully and compassionately as I was able. Aims I found to be not as readily available to me as I would have flattered myself to hope – compassion and truth not really having been the modus operandi of my younger self.

As I wrote, I forgot about the keylogging because the difficult writing became immersive – as I hope the reading of it will be – because my story and my characters – Tony and Laney, Jo and Nick – absorbed me, and in the end it was their story that cured me of my loneliness, the keylogging project was just the booster to get the journey started.

I don’t feel a need to perform this experiment again. If someone wants to wire me up or whatever I will dutifully agree if it will help them with what they have to do, but personally the need and the moment have passed. Collaborative work is embedded now across my broader practices and actually, every now and again, in a busy house in a busy world, strapping myself alone into the world loom seems like a respite.

Staying On is published by Duckworth 18th October

C. M. Taylor is the author of the cult Kev King novels described as ‘Brilliant’ by The Sun, and ‘Horribly entertaining’ by The Mirror, which have been optioned for TV. He’s been nominated for the British Science Fiction book of the year and is a freelance editor of fiction. Craig co-wrote the thriller, Writers Retreat, which premiered at the Sitges International Film Festival. Craig lives in Oxford where he canoes, runs and hangs out with his kids. Twitter: @cmtaylorstory www.cmtaylorstory.com British Library Keylogging Data

Introducing the Poetry Map
Origins The Poetry Map has its origins in a feature on Facebook’s homepage by which users could list countries they had visited and see these appear as pins on a map. While this...
Screenshots: Writing With Machine Learning
Screenshots is a regular feature by Simon Groth, highlighting a project, app, or other resource of interest. Writing with Machine Learning By Robin Sloan Robin Sloan...
Practice-Based Research in the Creative Industries
The Editors of The Writing Platform encourage submission of short academic research papers that are accessible to a more general audience of writers and artists. These papers can b...
Hands Up for Digital Humanities: The Beginnings of an Exposé
There was nowhere to park. As if it wasn’t daunting enough to throw myself into the alien world of tech-heads and program-people, now I was late. I found the Loft – a boutique ente...
Crossing Continents With Transmedia
The first time someone mentioned the term transmedia to me I was already collaborating with four project teams. We were working to produce a comic anthology centered on my urban fa...
Between Fjords And Power Cords: The Fulbright Adventures Of Writing Digital in Norway
Syringes And Walls And Foundations It’s December, midway through my Fulbright year in Bergen, Norway. My wife, digital artist Alinta Krauth and I live on the third floor of a m...