Don’t you love that moment when you fall into a storyworld? The magic of storytelling relies on the  power of words to create the world you visit through the act of reading or listening. Suspending your real world situation, time and space, and even your body, you transport yourself into another, virtual world. But do you really need to lose the connection with the space you are in and your own body in order to immerse yourself in a story? What about audio-guided locative narratives, where the virtual world and your physical space overlaps, permitting you to become a part of a story, or even one of its protagonists? Imagine a story that happens in your ‘here’ and ‘now’. Imagine yourself standing in the middle of a storyworld, with your headphones on, guided by the narration addressing you directly. You are there, able to see and hear everything and you can (and should) explore the narrated world.

We fell in love with such stories; place-bound and walking-bound audio-stories that need to be walked-through step by step. From this fascination sprang the idea of an academic course for students of creative writing, film and media studies and cultural studies at the Institute of Contemporary Culture (University of Lodz, Poland) in the academic year 2019/2020. This course was designed as a laboratory to explore the field of such literary narration more deeply and we were all part of it in our different roles (as lecturer and students from different departments) and at some meetings we were accompanied by people from the IT industry. This experiment was based on the fusion of three perspectives; the artistic, the academic and the technological. Having started with initial academic research on the topic, we moved to practice-based research and then went on to look for the best technology to realise complex projects. Although we quickly agreed that hi-tech is not a prerequisite for achieving the goal of a fully immersive locative story, we decided to experiment with some accessible technology that could enhance our audio narrations.

To accomplish this goal we used the Tropiciel App from Polish IT start-up, eDialog. This app was created in 2018 to bring urban gaming to the other dimension by enabling the tracking of a gamer’s location and facilitating implementation of audio-visual and playable elements. We decided to test its capabilities as a literary platform. But our goal wasn’t to think about this technology as an attractive additive, a gimmick, but as something that could really help us to create and tell a story. We dreamed about using it to enhance immersion created with the audio-narration. And then, with the Tropiciel App, we created two stories to be experienced while walking through the city of Łódź with a phone in your hand.

The Story of One Bullet, created by Szymon Szul and Marta Dziedziela, the first of our  projects, was inspired by Andrzej Strug‘s book of the same title. It was designed to play intertextually with an original novel and with Agnieszka Holland’s movie based on it but  we weren’t interested in creating a classic adaptation. The latter we saw as contradictory to the idea of locative narrative itself and unconvincing as an audio-narration.

We decided to make some important changes. In our version of The Story …, the action takes place in the city of Łódź, but thanks to the visual materials, phone’s interface, and shifting the action time about twenty years ahead, the reader-listener can read his surroundings as retro-futuristic. In the Strug’s novel, the bullet traveled from one character to another and, thanks to this, the reader could get to know the point of view of various people involved in the revolution. But in our story the reader-listener becomes the main character. So, instead of passing the bullet from one person to another, as Strug did, we decided to forward the reader-listener from one character to another. The eponymous bullet is placed in the reader-listener’s hand (however, they don’t know that till the end of the story), and they are guided through the city (and the story) by the novel’s various protagonists. Every character who ‘intercepts’ the reader-listener has their own story to tell (and they use the recipient’s phone and headphones to do that).

The Story … also also uses visual materials and written fragments of text displayed on the screen of a phone. These  introduce the Unknown; a character writes to the recipient. Those written dialogues add an additional perspective to the story and offer a moment of pause for the reader-listener during their walk. They also always ‘happen’ in easy-to-access locations, so the reader-listener can always go back to them if they are lost. The Unknown also takes photos from the gallery and used the GPS location system to create a feeling that this character knows more about them than he does (finally, we only simulated that action; we explain the reasons for that later).

We wanted to direct the reader-listener’s attention, so we decided to balance the ‘clear’ transmission of additional information through the application interface (e.g. photos of the route and a map showing how to get to the next point) with ‘hacking’ the interface to make the reader-listener realise that someone is trying to either warn them (e.g. by encrypting the names of the locations to the reader-listener) or use them for their own purpose. This was possible as we could personalise the reply buttons (e.g. by changing ‘Yes, I am here’ button always used in Tropiciel). 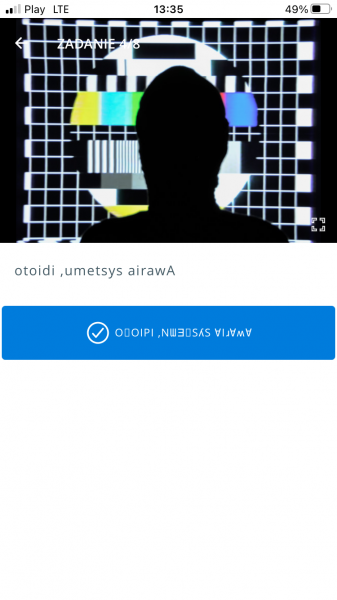 “The Story of One Bullet” by Marta Dziedziela & Szymon Szul Screenshot from the Tropiciel showing a message from the Unknown mentioned in the article.

The second project we worked on was Vanishing Murals (created by Anna Bednarek, Remigiusz Jóźwiak, Karolina Misiarek and Anna Nowak); an audio locative narrative focusing on the famous murals from Łódź as kind of literary city guide. The murals have become an everyday element of our city’s landscape, but, as time passed, people started losing interest in them. Our aim was to create a highly playable narrative that prompts people to remember masterpieces and their histories. Some famous murals become protagonists in our narration, taking the role of reader-listener’s interlocutors and guides through the city (and the story).

The plot of Vanishing Murals is simple and it is based on the real story of one of the murals of our city (called Ballon); the one that has vanished. The murals ask the reader-listener to discover what happened to the missing one. They need to ask the reader-listener for help because, even though they can speak, they can’t move from where they have been painted.

Every mural in our story is different and has its own soul (as the real murals vary in character). Thus, while reading-playing one has the opportunity to listen to various figures from wall paintings: e.g. artistic soul, famous composer Rubenstein or the always busy Late Passenger. We tried to express murals’ personalities and capture the melody and character of their voices. The literary form of each monologue was also important (e.g. Primavera, a mural that as the protagonist of our story has artistic and dreamy character, speaks in verse while other characters use clear You-directed prose structures).

Our characters, even if willing to speak to the reader-player, often do not give away information for free. They like riddles and the reader-player frequently (but not in every location) has to complete some tasks if they want to move further in the story. The riddles and puzzles were also used to smuggle some information about Łódź (reader-listener has to look for some information to resolve the tasks) and to deepen the protagonists characteristics (tasks given by each protagonist fits they nature, e.g. puzzles linked to the poetry given by above-mentioned Primavera who always speaks in verse).

Some of our plans have changed due to the (limited) capabilities of Tropiciel app and the company policy.  That is, we were limited by the technology that we used.

For example, in The Story … we had to give up our dreams of animating the text (which was inspired by works such as Semyon Polyakovskiy’s Maginary) or using reader’s personal data (like in Kate Pullinger’s Breathe), because Tropiciel did not offer such features. Although using photos from the reader-listener’s gallery or extracting data about the reader’s previous location(s) were possible, the app developers did not permit us to use such features, as they were afraid that consumers would perceive this trick as a violation of their privacy (so we only could simulate that, as marked before in case of The Unknown).

In Vanishing Murals we had to change previously planned tasks for readers/players, adapting them to the size of the phone screen (playable parts of the story are displayed on the screen, accompanying the audio-narration). A good example here is a task given to the reader-listener by Primavera. She asked her listeners to arrange pieces of Julian Tuwim’s poem in the correct order. The original text had to be shortened because it did not fit the screen. 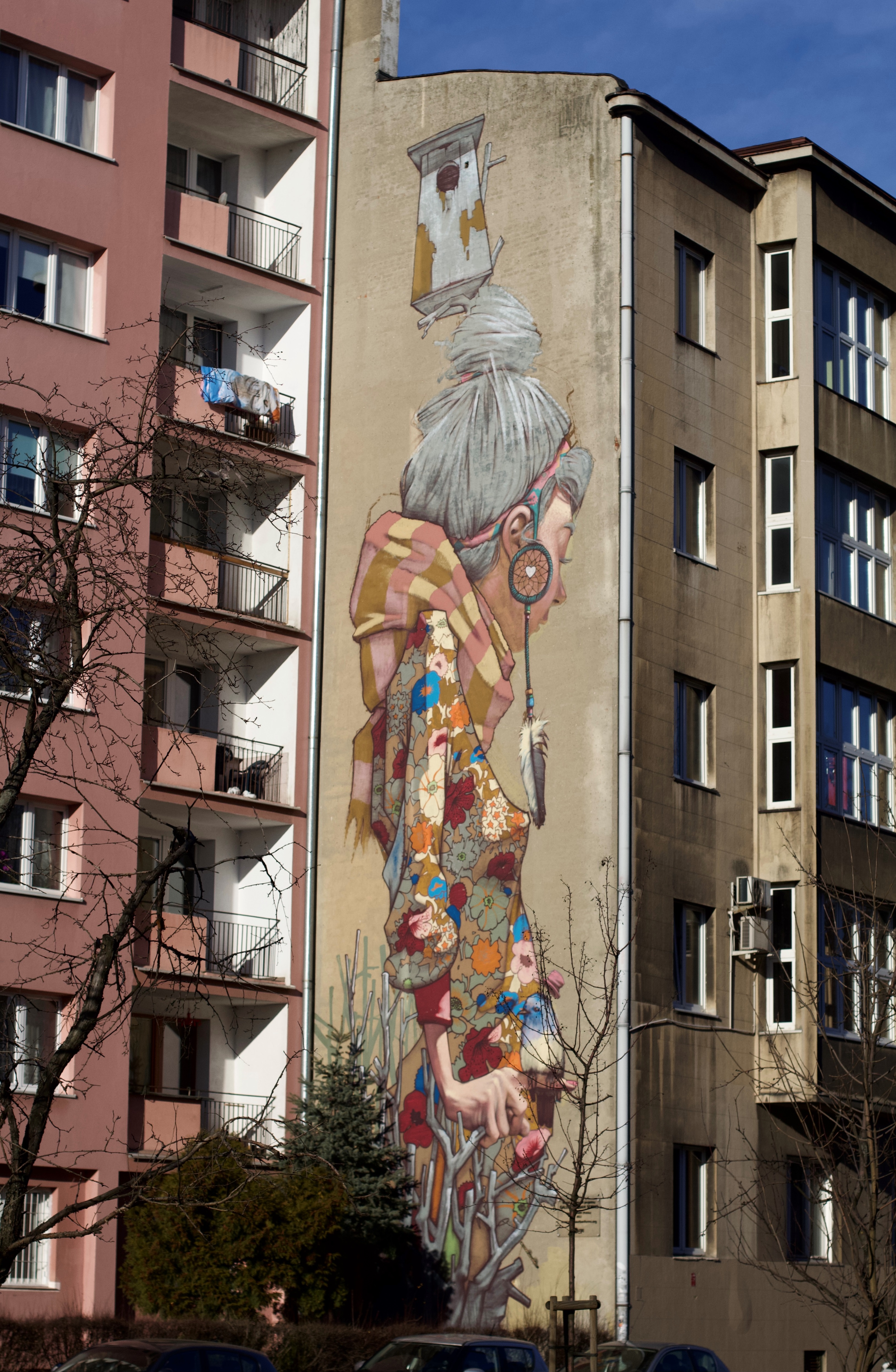 We were aware that the technology we were using was not perfect and we tried to creatively use this imperfection. Due to potential errors out of our control (such as  issues with confirming locations near tall buildings) we decided that in The Story … the phone would be presented as an outdated technology that often acts up. This way, we minimised the risk of the reader/listener being taken out of the story because of technological problems. All those issues can be logically explained in the storyworld or even seen as the reader/listener’s fault.

Based on our experiences during this project, we have some tips for writers  wanting to create a locative narrative using  audio-narration.

Listening in to detention during lockdown
It’s August 2020 in Melbourne, Australia – roughly a month into what would become one of the world’s longest COVID-19 inspired lockdowns, at 111 days. I’m out for my daily run alon...
Designing a VR Experience in a Covid-19 World
In September 2019, five months before the pandemic, I moved to Toronto to begin a PhD at York University. I had been to the city before, and as I was a new international student  I...
The Digital Journey of RadioBook Rwanda
In the run up to the launch of RadioBook Rwanda in Rwanda’s capital, Kigali, the three young creatives behind the international publishing project reflect on the digital journey of...
Writing Stories for XR
I love location-based promenade theatre. I feel immersed in the narrative, surrounded by actors, music and lights. One of my favourite things to do is see if I can break my own sus...
Call for Articles on Storytelling in Immersive Media
The Writing Platform is commissioning articles of approx 750 to 2,000 words on all aspects of storytelling through new forms of narrative delivery and audience interaction in immer...
The Challenges of HayleyWorld
Back in the late 1990s, I started trying to write a biography of William Hayley (1745-1820), man of letters, amateur doctor and champion of women’s writing, and someone whose priva...