During the summer of 2009 I spent a week reading and writing in residence at the Elizabeth Bishop House, in the tiny and thus somewhat incongruously named village of Great Village, Nova Scotia. Readers may know Great Village as the setting of Bishop’s haunting story In the Village, first published in the New Yorker in 1953. One day I went for a walk to the village store. I was on the hunt for postcards, intrigued by Bishop’s observation: “The grey postcards of the village for sale in the village store are so unilluminating… one steps outside and immediately sees the same thing: the village, where we live, full-size, and in colour”.

In the back of the store, which is now an antique shop, I happened upon a well-preserved copy of a City of Edinburgh Transport Map published by the Edinburgh Geographical Institute in the 1940s. Nova Scotia being New Scotland, an old map of Old Scotland seemed a perfectly reasonable thing to find. Why I felt the need to buy an out-of-date-map to a city I’d never been to was not at all clear.

Questions of place have long-pervaded my fiction writing and maps have figured prominently in many of my web-based works. An outline of a map of Nova Scotia served as the interface for one of my earliest web-based works, Mythologies of Landforms and Little Girls (1996). In The Cape (2005), I used an assortment of maps, charts, and diagrams borrowed from an Environmental Geologic Guide to Cape Cod National Seashore published in 1979 as stand-ins for family photographs. In In Absentia (2008) I used the Google Maps API to haunt the satellite view of the Mile End neighbourhood of Montreal with stories of former tenants forced out by gentrification. My first novel, Words the Dog Knows (2008) included an impossible map of ancient Rome. I’d never set out to map a place I’d never been before, but then sometimes maps seem to call places into being.

City of Edinburgh Transport Map published by the Edinburgh Geographical Institute in the 1940s.

In 2011 I was commissioned to create a new work for an exhibition called Remediating the Social, at Inspace gallery in Edinburgh. Handily I already had a map of the city. In May 2012 I travelled to Edinburgh to begin research for what would eventually become a massive hybrid print and digital project called The Broadside of a Yarn (2012). More information on that project can be found in an article called The Print Map as a ‘literary platform’ published on The Literary Platform in May 2013.

During my research I used the 1940s edition of the City of Edinburgh Transport Map purchased in Great Village, Nova Scotia, to undertake a series of experimental walks, or dérives, in and around the modern city of Edinburgh. Dérive is a practice first explored by the Letterist International in Paris in the early 1950s and later taken up by the Situationist International. The concept of dérive was introduced by Ivan Chtcheglov in his Formulary for a New Urbanism (published under the pseudonym Gilles Ivan). Chtcheglov proposes a future city, in which “the main activity of the inhabitants will be CONTINUOUS DRIFTING” (1953). In The Beach Beneath the Street: The Everyday Life and Glorious Times of the Situationist International  (2011), McKenzie Wark suggests that Chtcheglov “sought not the rational city but the playful city, not the city of work but the city of adventure. Not the city that conquers nature, but the city that opens toward the flux of the universe” (2011: 20). The advertising copy on the back of the City of Edinburgh Transport Map hovers between these states — on one hand promoting such solid stolid institutions as the Bank of Scotland, North British Rubber Footwear, and Scougal’s Oatcakes, “Scotland’s National Food in its Most Palatable and Convenient Form” — and on the other hand issuing imperatives toward the exploration of a playful city, a city of adventure, and, read from a contemporary vantage point, a city safely adrift in simpler past:

Follow the Star of Health.
Encompass the City.
Map it Out For Yourself.
Do Not Allow Your Holiday to be Spoiled by Rain.

However many times I set out toward the flux of the universe in search of the points of interest advertised on the map — The Largest Stock of Hand-Knitted Woollies in Britain, Radiator and Mudwing Repairs and Other Sheet Metal Work, Vertical Filing Systems and Visible Card Index, and Carpenter Joiner Jobbing Specialists, orders in any part of the city or elsewhere in towns or country promptly attended to — dérive led me instead into Edinburgh’s wealth of museums, libraries, and used and antiquarian print, map, and book shops.

In the Old Town Bookshop I found an A5-sized staple-bound booklet called Walks from City Bus Routes published by Edinburgh City Transport in the late 1950s. This booklet contains twenty-two narrative descriptions of walks, each beginning and ending within easy reach of bus routes, and each illustrated by a small black and white line drawing. The preface states: “this book is designed for the visitor or the resident who wishes to have a change from the more usual places of tourist interest and to combine a little mild exercise with exploration of the lesser known parts of the city and suburbs.” The unnamed author adds that her one wish “is that those who follow these trails derive as much pleasure from them as she has done over the years.”

Many of the lesser known parts of the city and suburbs the author urges us to explore are no longer know-able. Many of the green spaces on the City of Edinburgh Transport Map have long since filled in. Time has rendered these two immutable print documents nearly nonsensical. I decided to further this process.

I created a computer-generated narrative called Walks from City Bus Routes which uses JavaScript to randomly and endlessly recombine illustrations and portions of text from the Edinburgh City Transport booklet and bus and tram route icons from the City of Edinburgh Transport Map. The term “computer-generated” is something of a misnomer here. The computer does not generate these new texts. It selects phrases from the booklet which I have typed into preset lists (variable strings) and slots them into templates (sentences). Take, for example, the following sentence:

Take the #{take} and continue #{continue}.

Take the [‘path leading down the hillside just before the monument’, ‘path that leads off to the left’, ‘broad and easy descent down the grassy slope’, ‘towpath along the side of the park’, ‘dirt road that runs uphill under the wall’, ‘road behind the Inn’]

Here are but a few of the possible sentence results:

Take the path leading down the hillside just before the monument and continue along the High Street to the old parish church set in a green graveyard.

Take the towpath along the side of the park and continue in the same direction.

Take the broad and easy descent down the grassy slope and continue through the fields.

Though many of the paths, towpaths, grassy slopes, fields, and roundabouts referenced in the Edinburgh City Transport pamphlet no longer exist, as variables within JavaScript strings these past places are ascribed new locations in computer memory. Called as statements into this new narrative structure, these past places become potential (albeit imaginary) destinations once again (albeit for readers rather than walkers).

The result is a new guide ‘book’ which perpetually proposes an infinite number of plausible yet practically impossible walking routes through the city of Edinburgh, and and its book shops, confusing and confounding boundaries between physical and digital, reading and writing, fact and fiction. 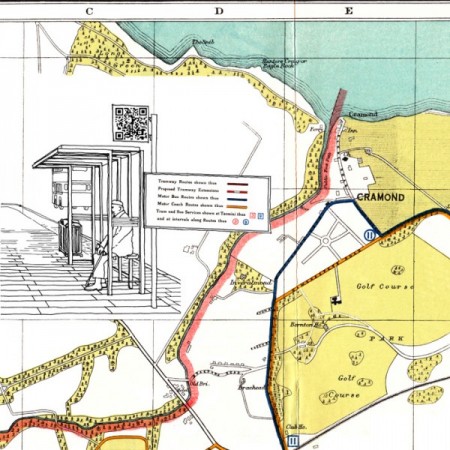 In the gallery installation of The Broadside of a Yarn exhibited in Edinburgh during Remediating the Social in November 2012, this new digital variable iteration of the Walks from City Bus Routes pamphlet was accessed by scanning a QR code embedded in a cartographic collage which remediated elements of the City of Edinburgh Transport Map and a drawing borrowed from the Edinburgh Streetscape Manual, published by the Lothian Regional Council in 1995. These visual links to the work were also reproduced in an A3-sized print map handout iteration of The Broadside of a Yarn, which was handed out freely during the exhibition and continues to circulate through gift exchange economies and postal networks.

Earlier this year I created a stand-alone web-based version of Walks from City Bus Routes, which appears in the Spring 2015 issue of The New River – a journal of digital writing & art. 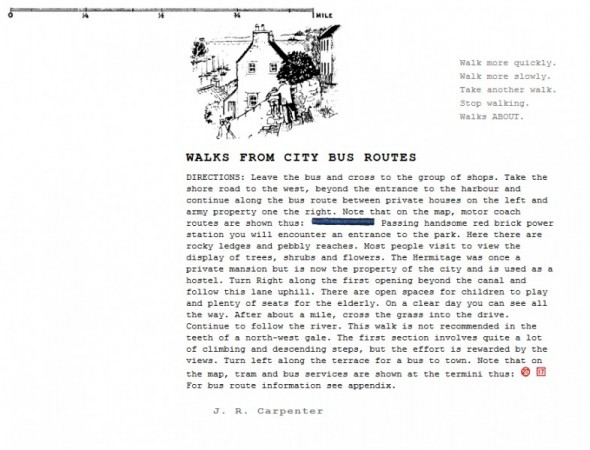 Readers keen on bookish-drifting-wander-walking may also be interested in Wanderkammer: A Walk Through Texts a web-based collection of hyperlinked quotations from a wide range of writing on walking, accompanied by a bibliography. Wanderkammer was included in Walk poems: A series of reviews of walking projects edited by Louis Bury Corey Frost published on Jacket2 in 2011.

J. R. Carpenter is a Canadian artist, writer, researcher, performer and maker of maps, zines, books, poetry, short fiction, long fiction, non-fiction, and non-linear, intertextual, hypermedia, and computer-generated narratives. Her pioneering works of digital literature have been exhibited, published, performed, and presented in journals, galleries, museums, and festivals around the world. She is a winner of the CBC Quebec Writing Competition (2003 & 2005), the QWF Carte Blanche Quebec Award (2008), and the Expozine Alternative Press Award for Best English Book for her first novel, Words the Dog Knows (2008). She lives in South Devon, England.