So how do you define this thing called literature? How does that book in your hand compare to text glowing from a tablet? How do those story podcasts drifting from speakers measure up to the intricately sprayed pieces of textual graffiti luring you into otherwise forgettable laneways? If you asked Christopher Walken as he floats above a hotel lobby, defying the laws of gravity and arthritis, his bony fingers would take aim at two elevators, suggesting we could either blow wit’ this or we could blow wit’ that. My pasty digits would like to suggest another weapon of choice: you can blow wit’ this AND you can blow wit’ that.

Like most Gen Xers I began knee-deep in an analogue world of short stories, poems and manuscripts and being reliant on traditional publishing pathways. It was a world where books had spines and a handheld device meant tricking Donkey Kong into giving up his keys on a Game & Watch. It took thirty years of living, breathing and attempting Kareem Abdul–Jabbar fadeaways for me to see things differently. My dabbling with digital has led to the realisation that literature isn’t simply an analogue form or a digital form, instead it’s a process that requires a balance of both that is weighted according to a writer’s individual strengths, the needs of the project, and the expectations and requirements of an audience. This balance between digital and analogue is sometimes lost when living in a world that’s dominated by social media, transmedia and other digital publishing platforms. But to dismiss the analogue is to dismiss who we are; human beings that touch and feel and enjoy tactile sensations; strange beings who can appreciate the unique and the ephemeral. These sensations are usually embodied by leather-bound tomes or dog-eared first editions, but beyond the fetishisation of books, I believe this human connection with the tangible can, and should, be extended to embrace other analogue forms.

Her to Him by Matt Blackwood.

After years of following the well-worn writers’ path I began my drift towards digital with a City of Melbourne Laneway Commission and the MyStory platform. I designed it as a website and app that played narrated fiction written by myself, Tony Birch, Cate Kennedy and Barry Dickins, and these locative stories were experienced in the places where these stories were set. This led to a series of experiments where I began delivering locative literature using QR codes, and learning how these codes could act as a bridge between digital and analogue spaces. What began as stickers triggering my short locative fiction evolved into projects which altered the form of these codes to include woollen brooches, keyboard keys and living plants, and this visual art and its linked short stories wound up being presented in galleries and public spaces across Australia and overseas.

Since then I’ve found myself returning to analogue forms with a broader definition of what analogue might mean. Analogue as in bespoke laser-cut word sculptures and Dymo labelling tape. Analogue as in Post-it notes, alphabet fridge magnets and felt letter boards. Analogue as in pretty much anything that can be adapted to present my poems or short stories.

It’s this adaptation of familiar forms to present literature in dynamic places that I find liberating and responsive. It also presents its fair share of challenges. I hover between being a writer, editor, publisher and printing press; crafting fictional stories which are relevant to factual places and creating presentation forms that are a blend of unique and practical. It requires prototypes, leaps of faith and funding. Anything published in the public realm is open to opinion, and whereas a critic can demolish your words but the work will still exist, if a vandal takes a similar approach, then a piece that may have taken months to create can be damaged and lost within minutes. Then again, I’ve had Post-it note stories remain defiant in laneways for longer than a Melbourne winter. So it’s this balance of risk and reward, the bespoke and ephemeral, that compels me to continue working in this way, and by using familiar forms in different contexts I aim to create a point of difference which attracts and engages a diverse range of audiences. 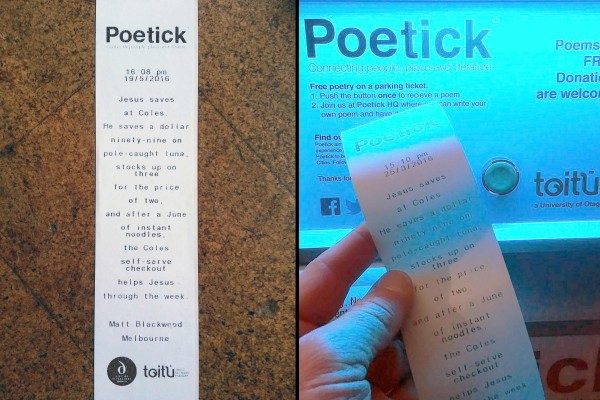 Some people might label my writing and art as having traces of ‘social engagement’. I’m not allergic to this – in fact, I’m proud of it. What I do have a problem with is racism. I also have a problem with sexism, greed and environmental destruction. And then there’s the problem of a government who invests more in symphony orchestras and opera in a single year than it does in seventeen years for literature. So instead of whispering “resilient” beneath a neo-liberal cloud of budget cuts and vanishing book parallel importation restrictions, I believe now is the time for the broader writing and publishing industry to evolve from being a niche cultural pastime into being more socially relevant than ever before by embracing more forms beyond the book and eBook. The industry needs a broader range of readers for the sake of sales and to champion the important role literature plays within a democratic multicultural society. Through my own art and writing practice I’ve learnt that using everyday forms in different contexts can result in powerful story exchanges. For Melbourne Now I created ScrabbleLit which presented three conversations in three locations using different coloured Scrabble tiles stuck to outdoor walls. One of these conversations was set in a laneway where I had seen people sheltering in the past, so I wrote a fictional conversation between a man who had just started living on the streets and another man who had been homeless for a while:

A week after installing the piece I was walking by and noticed that the ‘e’ and ‘a’ of ‘easy’ had gone on a walk of its own. Having left my spare Scrabble set in my other jacket I didn’t have any spare tiles on me, so the following week I returned, and that’s when I noticed someone had already repaired the piece by writing the two missing letters in pen. 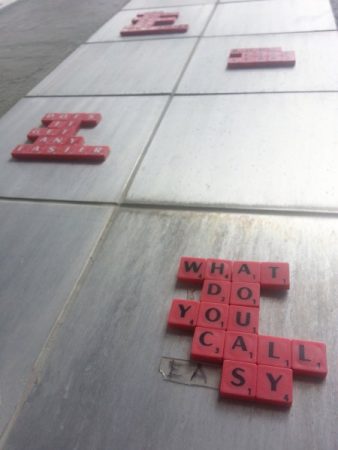 The concept of literature by the gram instead of literature by the kilo was first revealed to me by the work of Hemingway and Carver, and more recently by Josephine Rowe. Analogue forms have taught me there’s more than one way to write about skinning a cat. And life has taught me that it’s both the monotony and magnificence of human existence that everyone truly connects with. I’m not suggesting that we abandon conventional forms, instead I’m suggesting that literature needs to be more broadly available in a variety of themes and forms to act as entry points for those people who don’t have the necessary literacy skills or those people who do have the skills but believe they don’t have the time. And then there’s those people who were fed narrow definitions at school or believe the hype of some publishers in their push to sell more books, and have unfortunately come to the conclusion that if this is what literature is then literature isn’t for them. 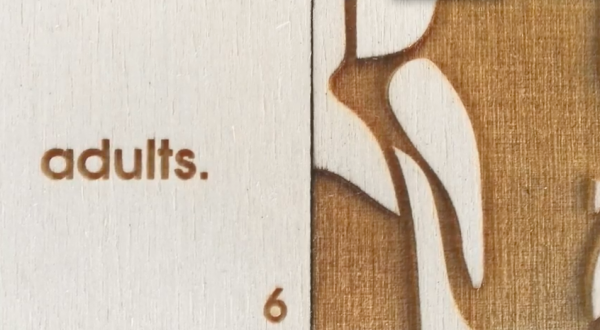 So considering all these limitations how can we possibly engage more people with literature? Well, we could start by having permanent library outlets at train stations like those in Spain, Colombia and Chile, which have made it easier to lend and return books, and as a result, have greatly increased their library memberships. Our bus stops could be built with perforated metal to present poems in a similar way to Switzerland’s offerings of visual art using Pic-Perf, which is also more resilient against vandalism than panes of glass. Our dark laneways could be made safer with lightboxes and projections on walls displaying poems and short stories in a range of forms and languages like those in Krakow, Nottingham and closer to home. Or we could invest in any of the other one hundred and ninety-seven City of Literature initiatives that have been compiled on my website. The obvious advantage of having more people engaged with literature through initiatives like book vending machines or story napkins in cafes is that literature becomes truly ubiquitous; not just something you do if you have the time, but something you do all the time as it’s everywhere. And the more presence and acceptance literature has in the public realm then the wider conversations we can have about an economy measured in industries beyond mining and construction to include Australia’s creative industry; an industry which already contributes billions of dollars to Australia’s economy and employs more people than agriculture, construction or mining. These conversations could ask why investment in the arts is being cut when more people engage in the arts annually than the combined attendances of all football codes. Conversations that could ask what our lives would be like without having any stories to read, paintings to see, music to hear or games to play. Conversations that could ask how a full-time writer is meant to survive when earning an average of $13,000 a year.

Despite this lack of cultural understanding and financial security I continue to scrawl in blue ink because of literature’s ability to inspire and entertain, and we need more writers sharing this understanding in broader ways to become better advocates for the societal benefits of literature and literacy in all its digital and analogue forms. I’m with Christy Dena; besties with transmedia, when she says the time has come to recall the second line of a popular proverb:

Jack of all trades, master of none, though oftentimes better than master of one. 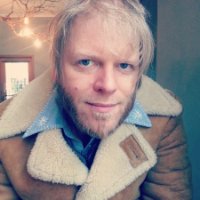 Matt Blackwood is an award-winning writer and artist fascinated with stories that are experienced and linked to the places where these stories are set. His stories have been commissioned to appear in a diverse range of visual forms in galleries, libraries and public spaces across Australia and overseas. Matt has been a guest writer and artist at festivals, schools and writers’ centres, and has also compiled a list of 200 City of Literature initiatives to increase the presence and engagement with literature in forms beyond the book and eBook.

Breathe – a digital ghost story
What happens when a story comes to you where you are reading? What new types of storytelling are made possible when narrative accesses technology to personalise itself to you? ...
Thoughts on the weaponisation of failure
All of old. Nothing else ever. Ever tried. Ever failed. No matter. Try again. Fail again. Fail better. This is the phrase. Adopted as a pep-talk by silicon valley Imagineers and t...
The New Media Writing Prize: The First Five Years
Beginning in 2010, the New Media Writing Prize has been the only competition in the world to open its digital doors to every kind of online, multi-media, interactive storytelling, ...
Maggie Gee: Making at the MIX Conference 2013
I am no spring chicken. In my writer’s memoir My Animal Life  I told how I lived  through the dramatic evolution of printing into a universal capability. Now I am poised on the gre...
Fiction Express: Co-Writing With Thousands of Children
When I read Choose Your Own Adventure books as a kid, I always flipped to the end to see which route through the story allowed me to escape violent death, and made my choices accor...
A Poetry Inspired Animation
An email exchange between Stevie Ronnie and Liam Owen reflecting on the making of Four Years from Now, Walking with My Daughter. An animation by Liam Owen inspired by Stevie Ronn...