Last year, I was invited onto local radio to talk about a new category introduced to the Queensland Literary Awards: the QUT Digital Literature Award. I had been invited in my capacity as chair of the judging panel alongside two of the shortlistees: Mez Breeze and Jason Nelson. The first interview question was directed to me and—I must admit—I braced myself, knowing exactly what was coming.

‘So, Simon, what is digital literature?’

Ah yes. There we were in 2017, still futzing around with definitions. This can be a source of frustration, especially when you consider it appears to be a problem peculiar to this category. The chair of the children’s book panel, for example, does not need to clarify what a book is, or for that matter what a child is.

For the record, my response to the question tends to hew closely to the awards’ stated intention: to ‘showcase innovation and creativity in storytelling for digital media and new directions in contemporary literary practice informed by technology’. The Digital Literature Award is the second of its kind in Australia’s premier literary awards space, after the Western Australian Premier’s Book Awards established its Digital Narrative category way back in 2010.

So why does this question refuse to go away? Why is it that, for lay audiences who haven’t spent the past ten years or more immersed in digital literature, the term remains opaque?

Another related problem points to the continued lack of a single work or body of works that stands a as a singular example of digital literature. Why should such a singular breakthrough be required for digital literature when no such ‘definitive’ work exists for other categories? For one thing, the other award categories under consideration are not solely defined by the technology of their container: indeed, almost all other categories represent variations of the same print technology. But the norms for all those forms—novel, long-form non-fiction, short story collection, picture book, poetry collection—coalesced at some point in their history around seminal, defining works. Though the identity of such works can be argued over ad infinitum, they certainly exist.

In digital literature, we have seen a dazzling array of wildly inventive work (even a brief survey of Breeze’s or Nelson’s oeuvre, for example, confirms this), but the breakthrough, the work that everybody knows about even if it’s not exactly representative, continues to elude even the finest practitioners and, while not absolutely necessary, presents a barrier to establishing an idea of digital literature in the popular imagination. Indeed, this is one of the major goals for the QUT Digital Literature Award and others like it. But, for the foreseeable future at least, we will continue to be asked to explain exactly what this stuff is all about. 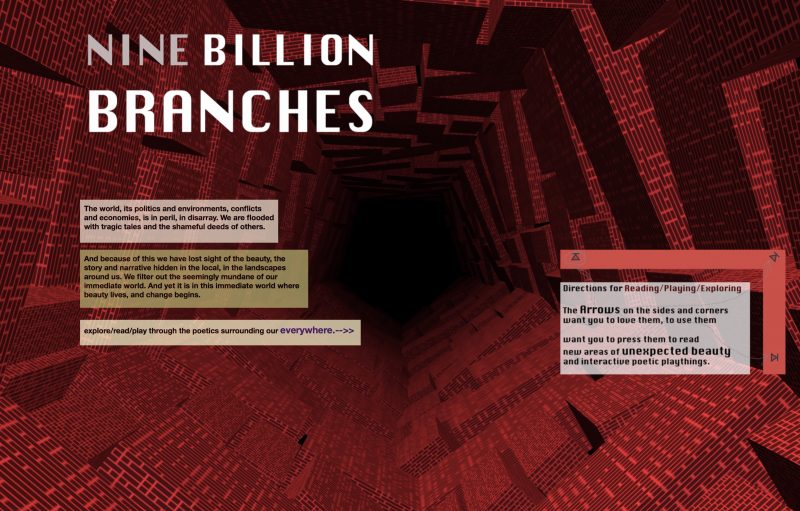 But beyond determining boundaries and promoting the idea of digital literature in the wider reading public comes, for the judging panel, the difficult task of determining its quality. Specifically, how does one weigh up the wildly different works that fall within those boundaries against each other to determine a winning entry?

Personally, I like to keep things simple. The title tells you everything you need to know.

The first consideration for me is examining how text is used as an integral part of the narrative. Video, animation, graphics, and audio can all of course be combined variously to create inventive narratives, but an entry where text does not form a significant part of the storytelling, for me, would fall too far outside the scope of a literary award. But even works that are clearly worthy in this regard bring challenges for judges. How does one judge, for example, non-linear poetry against remix works against linear prose augmented by multimedia elements? Subjectivity does come into this, but the task requires judges to consider the purpose of narrative. For me that means thinking about the quality of the connection between writer and reader and the clarity of the communication between.

The other consideration for the judging panel is around the technology. What does it mean for a literary work to be ‘digital’? For many people, this automatically means ‘screen’, which to some extent is fair enough. The rules of the award at the moment specifically refer to the screen as an essential medium of delivery. But thinking more broadly, ‘digital’ literature uses technology as an essential part of its design. A great digital narrative tells a story that relies on its underlying technology: stories that make use of the fluidity of digital media, either in their construction or their delivery.

All the shortlisted entries from last year exemplified these ideas in various ways. Looking through the list offers some indication of the complexity of the panel’s task.

After much deliberation, though, the panel granted the inaugural award to Jason Nelson. His winning entry, Nine Billion Branches, finds a unique way to represent fragmented and non-linear narrative. It grasps at meaning in a way that is thoroughly contemporary, reminiscent of grappling with social media threads mid-conversation. It requires its readers to actively negotiate their way through a conceptually three-dimensional space (up and down, left and right, in and out). Its structure recalls the manic pace of today’s online rhetoric, but the narrative reveals itself only when the reader, by choice, slows down to reflect on each fragment of text as a piece within a complete picture. In Nine Billion Branches, Nelson makes a pointed critique of Australian culture, the commercialisation of public spaces, and the politicisation of private spaces. It is a piece that could only exist in a digital environment, but maintains a handmade aesthetic, finding beauty in mundane space of everyday life.

In other words, this is a challenging, but beautifully written work with an urgent message, told in a way that could only be constructed and experienced via digital media, published to the web.

But, while I see in Nine Billion Branches a work deeply immersed in digital culture, I am aware some (perhaps many) readers simply see a screen-based work. This is what I think will be a challenge to the future of literary categories built around technology. A myopic focus on the screen as the defining characteristic of digital literature could eventually lead to a cul-de-sac. Our society and technologies might be screen obsessed today, but the fluidity of digital media has been influencing storytelling long before we carried screens everywhere with us and will continue long after the next interface innovation comes along.

Does that mean I just blurred another defining boundary of digital literature? I should really stop doing that.

The 2018 Queensland Literary Awards are open for nominations until 31 May.

Simon Groth is a writer and editor whose works include Hunted Down and Other Tales (with Marcus Clarke) and Infinite Blue (with Darren Groth). With if:book Australia, Simon created a series of award-winning experimental works including the 24-Hour Book, live writing events at writers festivals around the world, and works of literary remix.

Getting (Some Of) It Funded
Ten years ago I had an idea. It happened – as these things often do – when one area of my work rubbed up against another. In this case, the question of how to shoehorn the diverse ...
A Wolf in Sheep’s Clothing: The new art of writing in Instagram and Twitter
In the late 1950s JG Ballard worked on a novel that was to be posted in fragments, on advertising billboards. Although it never properly came to fruition, what Ballard managed to p...
Please touch this...
This article has been adapted from a talk delivered at the Pervasive Media Studio in Bristol (26/10/18), as part of the Friday lunchtime open talk series. This book...
The New Publisher: Penned in The Margins
The publishing industry has undergone many changes over the last few years, many of which can be attributed to the disruptions brought about by digital technologies. Alongside the ...
1.4 for Copy: An Interactive Sound Sculpture
Kelly Jones and Linda Sandvik are one of two teams we are supporting through the 2015 Writing Platform Bursary Programme, in association with Creative Writing at Bath Spa Universit...
The Fantastia Express
This is an article about an augmented reality practice-based research project, The Fantasia Express, commissioned by the UK Department for Transport through an InnovateUK competiti...