After the Storm
by Andrew Beck Grace

A beautiful example of online documentary, After the Storm recounts Andrew Grace’s first-hand experience with a vicious tornado that ripped through his hometown in Alabama. Its slick production courtesy of Moon Winx Films and Helios Design Labs pushes the boundaries of HTML5, layering text, video, images, and maps. But the power of this piece is in the heartfelt and reflective text, addressed to a ‘future disaster survivor’. 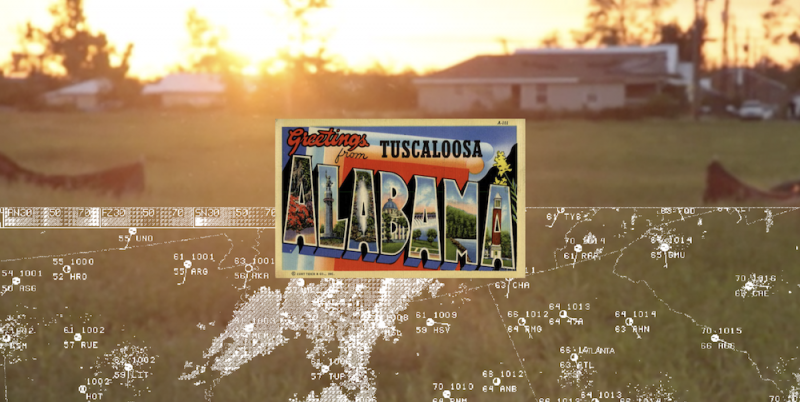 Most of the ‘interactivity’ here is of the simple scrolling-through variety and the writing is presented not as text, but rather is spoken by a narrator (presumably the author). Like many online documentaries, After the Storm might be considered simply a film posted online if not for its use of pagination, which allows the ‘reader’ to control the pace and flow of the narrative.

After the Storm was completed in 2015, making it positively ancient in internet terms. Not only is it gratifying to see the piece still online and functional in 2018, but also that its technology and design supporting the story is yet to feel dated.

After the Storm is available to experience online.

Immersive Writing Lab Series #5: Memories, Rituals and Emotional States
If you’re a writer interested in finding out more about immersive entertainment – discovering how your audiences can be immersed and play an active part in your story – then we hav...
Bath Spa PHD Studentships in Digital Creative Writing
PhD Studentships for practice-based digital creative writing, writing for games, and transmedia at Bath Spa University Bath Spa University has a very strong creative writing Ph...
A glossary of key terms
This glossary of key digital terms has been pulled together by The Curved House based on frequently asked questions from authors they've worked with in recent years. Our aim is to ...
A Short History of the Networked Novel
Digital technologies have given writers countless opportunities to experiment and play. New forms of digital writing are possible online and writers are embracing their potential. ...
5 Good Online Productivity Tools For Writers
Ah, tools. Such a seductive word, with that tactile, workmanlike ring. And such seductive implications. Accumulating tools feels like the very opposite of time wasting. Tools promi...
New Media Writing Prize: the First Eight Years
Beginnings and developments In 2010 when we began this adventure into new forms of writing, we had no real idea what we would receive as entries. A colleague of mi...