I set out to make ‘A dictionary of the revolution’ in 2013. I planned to record conversations with different people, asking them to define words I heard people using to talk about politics in Egypt. Then I’d use transcriptions of their speech to create entries in a subversive ‘dictionary’ that tries to represent language as a material, capricious and changeable. At the start, I proposed it as a printed book project.

It’s not that I had never worked with text outside of a book before. More than a decade earlier, I’d ventured away from left-aligned stanzas into making visual and concrete poetry, maps and drawings made of text, and poetry games. I adored artist books, especially those that play with structure to conjure new ways of reading. Cards come up repeatedly in my practice. Cards are unbound pages that allow for fragmented and fluid narratives. They can be laid out on a surface, shuffled, and recombined.

The dictionary project started with a set of cards. In 2014, I gathered a list of 160 words that I heard come up frequently in conversations about politics in Egypt. I printed 250 sets of vocabulary cards, each housed in a palm-sized box. Conceived as a research tool, the box also works as a game or conversation starter. 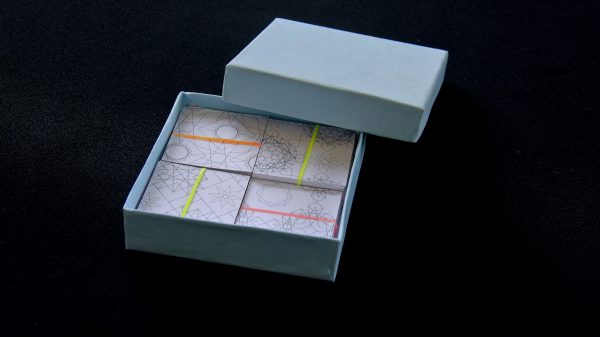 Vocabulary cards for a dictionary of the revolution (2014), photo by Amanda KM

Six months later, I started listening to recordings of nearly two hundred people interacting with the vocabulary box. First I edited an audio archive, then worked with transcriptions of the archive to assemble the text. The process was years-long, obsessive and laborious. I took the long route. Rather than work with each recording individually, I listened to recordings by term. This meant that I was constantly rotating between recordings of different individuals. I wanted to reach a plural understanding of each term, with many individuals near to each other giving unique definitions. My circuitous route through hundreds of hours of recordings demanded a publication twisted out of the linearity of the bound book. 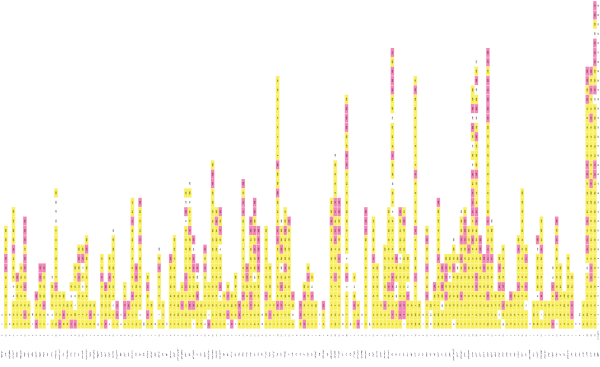 Working log for the project, image courtesy of the artist

To be honest, other pressures pushed me away from print. I wanted to launch the publication to an Egyptian audience first, and if I tried to publish a book in Egypt, the text would have passed through the hands of censors. I was not at all confident that it would return intact, or that I would be willing to make changes. Moreover, I didn’t want the attention such a process might bring to me or the project.

Earlier, I met a young publisher in Cairo who was interested in putting it into print. I brought up my concerns to him, which he addressed this way: One, he planned to write a foreword to the text which would directly declare that I was a foreign researcher, a US citizen, or something along those lines. Two, the book would not be placed in bookshops, but would only be available by mail order.

The question of access was the decisive factor in publishing digitally. By 2017, the public atmosphere had changed dramatically in Egypt. The loud and unrelenting conversations that had inspired the project, expressing ideologies previously relegated to very private spaces, had disappeared under great weights of intimidation, harassment, prison, and other methods of repression. I was uncertain how to distribute a printed object about a subject most people had gone silent about. It seemed intuitive to turn to digital space, where a large audience could access the text at any time.

Next came the question of how to organize a text originally intended for the page in digital space. I thought back to something Ahmed Refaat, the lead researcher, brought up during the research. He wanted to ask participants to group cards into families of related words. I thought it might distract from the intimate flow of conversation I wanted to record. But now, with texts woven from everyone’s speech, it was possible to assemble those families. By searching for a term in the complete text of the dictionary, I could locate the entries in which it appeared most frequently. I could answer the question, “What other terms do people talk about when they talk about a given term?” I did this myself for a few words, but needed a machine to do a complete and accurate analysis.

I was getting close. I looked for a programmer. After a few failed attempts, a friend introduced me to Youssef Faltas, who immediately understood what I was looking for. With his background in physics and art, he was the perfect person to work with to find the form to best suit the publication. We settled on a chord diagram, a data visualization that represents connections between nodes in a circular layout. Faltas programmed the machine reading of the text, animated the diagrams, and insisted on a one-page design. We used line weight to indicate the closeness of the relationships between words. Together, we overcame some challenges, including coming up with a vocabulary to talk to each other about what we were doing. (It wasn’t until after I completed the project that I learned about corpus linguistics, making me feel foolish as many of the problems I encountered along the way had already been tackled in the field.)

The website allows a non-linear reading through a web of connected concepts, events, objects, and characters. Definitively, it organizes the way people read the text. According to analytics, people spend only brief amounts of time on the site. I suspect that most play with the chord diagrams more than anything else, resulting in the curiosity of the text’s effective disappearance. If I’m correct, they’re playing with a surface, navigating through a text they don’t read. The project is translated into its visualization — or, as Faltas says, is gamified —and reading becomes clicking on words and navigating their relationships. 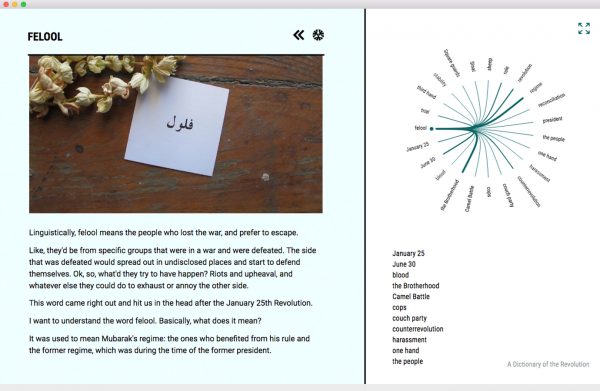 I included a downloadable pdf for each entry on the Arabic version of the website. I think, more than anything, that was because of residual ambivalence about moving completely away from print. I hope that people might collect the texts and save them locally. But publishing digitally also meant that I could share an archive containing some of the material used to make the project, like the library of audio clips. I still think of the project as a book, perhaps because I recall its five hundred page heft as I was editing the first draft. Now it’s a kind of book on the internet.

Amira Hanafi is an artist and writer living in Cairo. Her work has most recently been exhibited at Sodų 4 in Vilnius, Studio XX in Montréal, and Flux Factory in New York. She is the author of ‘Forgery’ (Green Lantern Press 2011) and ‘Minced English’, as well as a number of limited edition artist's books and electronic publications.

Hands Up for Digital Humanities – Find the Gap
Welcome to the third article in this series where we’re dissecting the multifarious entity of Digital Humanities (DH). To understand the context and scope of this series, and to co...
There Is No ‘I’ In Island
In 2021, I attended the 10 Days on the Island festival in lutruwita/Tasmania as part of a research project exploring the social impact of the creative arts in Regional Australia. O...
Where Is The Bird? - A Story of Augmenting Reality
Where Is The Bird? is the first augmented reality storybook to promote British Sign Language as a language for deaf and hearing children alike. Combining animated Augmented Reality...
Designing a VR Experience in a Covid-19 World
In September 2019, five months before the pandemic, I moved to Toronto to begin a PhD at York University. I had been to the city before, and as I was a new international student  I...
Designing an interactive audio narrative for children
“Alexa, open The Messlins” says one of my kids out loud to the smart speaker setup in our living room. After eight months of research, design and production, I was about to witness...
The Impacts of Collaboration on Writing
When The Writing Platform asked me to discuss how working collaboratively – as I do from time to time – might have influenced my writing process, I wasn't immediately sure. To give...