It can be scary to look back sometimes, almost like a fear of heights. It’s six years ago (six years!) that I first started thinking about the project that was just released in the iOS App Store. A lot has happened in those years. All of it helped my meditative reading app ‘Lotus’ take its ultimate shape. But it still makes me a little dizzy when I think about all the time that passed…

I was frustrated, all those years ago. I didn’t like the e-book of my last novel; it was a boring carbon copy of the paperback with some typesetting errors to boot. As a video games player (and sometimes writer), I knew that the phone on which I was trying to read my e-book could do so much more. Mix in a touch of naiveté, and my frustration turned into hope: maybe I could come up with a better way to present my books on a touchscreen device?

My quest began: first there was fundraising (I managed to get two subsidies from Dutch cultural funds). In the first subsidy application (and the only one I got without a hitch), I presented three goals: 1. re-imagine an existing serial story I wrote (based on my years as a games journalist traveling to games trade shows) in a new, digital-native form, 2. investigate ways to present text differently, experiment with the user interface and graphical elements, and 3. maybe use some sound.

To explore and realise these goals, I wanted to work together with experts in various fields (code, design, audio) and use my learnings to shape the story itself, like an iterative process, ultimately making everything come together in one logical whole.

That text was actually the toughest. As I built my team, prototyped, tested, iterated, the story was the one part I kept pushing back. I found that managing a complex project with many involved parties was a poor bed-fellow with the old writing profession. I never seemed to have the time (or patience) to sit down and write. And when I did get around to it from time to time, progress was tedious. I felt the pressure of my teammates (who were all so talented and productive), the subsidy funds, my own self-worth, and instead of pushing me forward, it held me back.

It was also easy to get distracted. Some of the work we were doing turned out to be super interesting, like:

– breaking text up into neat portions instead of filling the screen;
– using background colour and audio as a sort of ‘sense scape’;
– formatting the text in such a way the aforementioned sense scape could unfold in sync with the text;
– a zooming-out ‘outline view’. 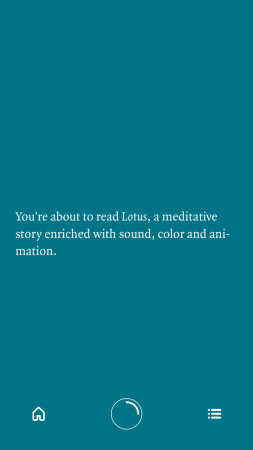 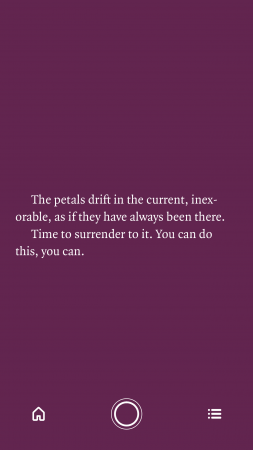 The first of those seemed to strick a nerve with nearly everyone who I presented our prototype to. People said they wanted to read everything this way. It was very tempting to think: let’s build a business out of this. And to think: screw that novella!

So I decided to launch Immer, a start-up looking to bring the ideas from Lotus to a broader set of books, before Lotus was even finished. For a while there, it didn’t look like it would ever surface at all.

But when we decided that Lotus would work fine as a pilot showcasing some of our ideas, I realised I would have to bite the bullet and write my long-postponed book after all. It was ‘almost’ done, after all, and not only would it show people how this new way of reading would work, it would also show potential investors in the business that we were able to deliver the goods. Which I was, right?

Late in 2016, the Dutch Foundation for Literature offered me a short residency in the translator’s house in Amsterdam, and I used it to work on Lotus almost non-stop. I think I really was almost done. But almost directly after that, I found out I had kidney cancer… They cut the whole thing out and I’m fine now. But it delayed the writing by almost a whole year.

Early last year I could no longer avoid it. I had to finish Lotus. It wasn’t pretty. Over the years I’d kept adding new elements to the story to make it interesting for myself to write, and the whole thing just got too complex. It had no focus. I wouldn’t have been able to tell you what it was about.

It was painful to continue, costing a huge amount of energy. It felt like something I should give up on. Nobody was waiting for this and I didn’t even like it that much myself. Still, I kept going. I’d never gotten the whole story on paper from A to Z, and now, with all my might, I finally did it. Well, I finished something.

We organised a big beta test in the summer of 2018. People liked the app, but the response to the story was lukewarm. Just as I’d feared, although a part of you always hopes that people will somehow suddenly love something you struggled with.

I put the text aside and focused on something different first: another pilot with an existing book by Dutch author Arnon Grunberg. It was a success, the app worked great and people seemed to love it. That got me hyped. I started warming up to Lotus, too. It helped immensely that there was an actual manuscript to bounce off of this time. I wasn’t adding ideas to ideas, I was adding ideas to actual work.

When I finally sat down to rewrite it in March, I did something I’d never done before: print the manuscript, lay it down besides my laptop and type the whole thing again. I was very critical of my own work. Threw out at least half of it. Added a little bit of just the right thing. For the first time since the instigation of the project six years ago, the story part of Lotus started to feel like a good idea.

I’d finally found my focus. Suddenly, I could see how the entire six-year-journey had distilled itself in the narrative: the traveling stories where I’d started, but also the experience trying to develop and sell the reading app, and to top it all off the cancer too. All of it was in there in the end.

There was one other problematic element: sound. From the start, testers seemed to be doubtful about the idea of listening to audio on their headphones while reading. It was either too minimalistic (not interesting) or too full (distracting from the text). On our side, we never seemed able to find the right shape. But my enthusiasm about the text finally coming together seemed infectious and the audio folks at SonicPicnic dove into the project with renewed energy. They ultimately created a really great dynamic soundscape, built in layers that swell up and ebb away, really adding something to the story.

In the end, we even were able to add an English translation by Jenny Watson over the summer. I’m really proud of being able to release a bilingual story app, innovative reading software with a text that took a lot to get right but is finally ready. I can’t wait to see what the world thinks!

Niels ’t Hooft is an author of novels and games. In 2013 his novel The Disappearers was published, and he worked on games like Toki Tori 2 and RIVE. He is the writer and instigator of Lotus, and founder of Immer. http://nielsthooft.com Saskia Freeke is the artist and designer responsible for the visual experience of the app and the story, including the interface, icons, animations and colors. http://www.sasj.nl Codeglue is the game studio responsible for the programming code running behind the screens of the app. http://www.codeglue.com SonicPicnic is an audio studio that designs sound and music for games, movies and commercials, among other things. Everything you hear in Lotus is made by them. http://www.sonicpicnic.nl

Invisible Islands - It's a Wrap: Diary Entry #5, Bursary 2013
The Writing Platform bursaries have come to a close. We caught up with Laura Grace and Caden Lovelace, creators of Invisible Islands. Caden and Laura applied for The Writing Platfo...
Why I Love RPGs
Now more than ever, writers are moving away from traditional narratives and towards interactive and experimental storytelling. Role-Playing Games (RPG) enable each participant to a...
Writing Subversive Games: Pitfalls and Potentials
One rainy evening somewhere at the early end of 1997, I found myself hepped up on adrenaline while zigzagging through a dungeon. Even though I was being hunted through mazelike hal...
Fabler is Here: Diary Entry #4, Bursary 2013
A second diary entry from 2013 Writing Platform bursary winners actor and writer Ben Gwalchmai and James Wheale; this team used the bursary to build on their existing work on story...
Still Defining Digital Literature
Last year, I was invited onto local radio to talk about a new category introduced to the Queensland Literary Awards: the QUT Digital Literature Award. I had been invited in my capa...
Launching a Virtual Literary Festival During Lockdown
Like all of us, March 2020 was a slow decline into horror at the news of Covid-19. While the British government dithered about what to do, I cancelled some events I’d been booked t...