The creation, presentation and publication of new creative work has been a core element of undergraduate teaching programs at Queensland University of Technology for over four decades now. What started as the writing and performance of works for the stage by drama and dance students, has been transformed via a tsunami of consumer-led technologies and pedagogical incarnations to embrace work designed for stage, screen, new media, animation and numerous digital delivery platforms. And in recent years the practice of creative writing (in all its forms) has evolved from a traditionally individual process to that of a vibrant team-based practice with writers working in vertically integrated, interdisciplinary production enterprises.

The School of Creative Practice in the Creative Industries Faculty at QUT is comprised of six discipline areas; Music, Dance, Drama, Creative Writing, Visual Art and Film/Screen & Media. The Bachelor of Fine Arts degrees that span these six programs incorporate discipline specific practice units, shared academic and critical studies units and in the final year, a suite of interdisciplinary creative practice units. These capstone interdisciplinary practice units were conceived in response to industry consultation, and the reflective and lived experience of creative practitioners in the teaching faculty, as critical to preparing emerging creative artists for the team-based creative environments they would engage with.

On July 2, 2020 Queensland University of Technology Art Museum launched an exhibition of William Robinson’s artworks titled By the Book at the William Robinson Gallery in Old Government House. The exhibition was partnered with the publication of a non-fiction novella of the life and works of William Robinson by award-winning Australian writer, Nick Earls. The exhibition curator proposed a format where an audiobook read by the author would guide visitors through artworks, photographs and artefacts referred to in the text. 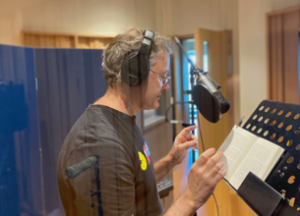 As a music academic at QUT, my role in the exhibition was to produce the recording of the author reading the book and to coordinate the subsequent editing and assembly of the sixty individual audio cues that accompany the in-person and virtual tour of the sixty works on display in the exhibition. During the editing and post-production process of the voice recordings, and in conversation with the curator and the author, the brief began to expand to include additional audio resources to enrich the audience experience in the gallery and online. A sound artist named Lawrence English had captured and made available nature soundscape recordings from selected field locations that featured in many of Robinson’s landscapes. William Robinson is also an accomplished pianist and a recording of Bill playing Brahms Intermezzo in A Major was offered to accompany the field sound recordings as additional media and context to complement the reading. 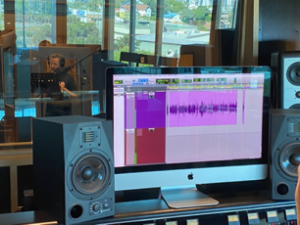 With the production brief now expanded to include location sound and occasional musical cues, I proposed the inclusion of small musical motifs to conclude each cue to signal the end of the cue for listeners (You know it’s time to turn the page when Tinkerbell rings her little bell). Using Bill’s recorded performance of Brahms Intermezzo in A Major as a point of departure, I recorded a series of fifteen separate five-second improvised variations on the main theme to place randomly at the end of each cue as our Tinkerbell signal to virtual and in-person viewers that the audio for that particular piece had concluded. The final format for the audiobook descriptions was finalised and the sixty cues were completed with author voice recording, location sound, background music and cue-end markers.

Final year Creative Writing students in the School of Creative Practice participate in a range of these interdisciplinary creative projects; some connecting with various aspects of the publishing industry (zine, blog and online formats etc..), some leading community writing initiatives and some collaborating with visual artists on illustrated poetry and prose publications.

The By the Book project with its combination of written text, recorded spoken word, sound design, music creation, neutral and character performance, audio recording combined with the design, production and publication of streamed programs and podcasts provide an exciting format for creative writers to participate in a wide range of team-based interdisciplinary practices. Within this model, writers are the creative and conceptual nucleus of projects that may include acting students, for whom training and experience in recorded voice-over and character performance will be extremely valuable. Audio and technical production students have the potential to collaborate, design and produce audio environments that capture core themes, locations and psychological landscapes. Music producers and composers interested in music and sound for film, television, multimedia and games can find a variety of challenges supporting and foregrounding key themes in the text through leitmotif and underscore. And Film, Screen and Media students may collaborate with the QUT student record label, Vermillion Records to realise these audio programs for distribution online.

The rise of the enhanced audio podcast has been hyperbolic in recent years on the back of genres such as audio books, serialised true crime, news and current affairs commentary, short stories, comedy, in-conversation and, wellness and mindfulness programs. According to US marketing firm Brandtastic, podcast listeners consume an average of seven different shows per week and podcast review sites speculate that there are currently between than 700,000 and 1,000,000 active podcast programs available for download. Apple podcasts alone feature more than 500,000 programs in over 100 languages. With blockchain tracking so simple with this digital delivery format, there are abundant analytics outlining the production growth and market penetration of podcasts as the entertainment format with at-home and in-transit the most popular.

Content has always been king, and undergraduate creative practice at QUT will increasingly embrace creative writers as core contributors, project leaders and collaborative artists in a diverse range of interdisciplinary production projects. Enhanced audio podcasting with its booming market consumption and dynamic combination of media, creative stakeholders and production practices seems certain to generate a curriculum and project-based learning wave to surf into this fertile future of storytelling. The By the Book project at QUT has provided an exciting stimulus for academics and students in creative practice disciplines to reimagine writers and writing.

Associate Professor Michael Whelan is an academic, writer, musician and autism advocate. Michael has written music and directed productions for theatre companies and festivals including Queensland Theatre Company, La Boite Theatre, Access Arts, Qld Youth Arts Festival and the Sydney Festival. In addition to his interdisciplinary live arts practice, Michael has written and directed a range of short films on topics ranging from post school transition for young people with autism to youth at risk and bullying. Michael’s recent research involves the role of creative practice programs in supporting young people experiencing equity and access obstacles in the transition from school to tertiary education and training.

Call for Articles on Augmented and Virtual Reality Storytelling
The Writing Platform is looking to commission articles of approx 750 to 2,000 words on creating stories with augmented and virtual reality technologies. This might include the use ...
The Making of an Immersical®
Live theatre performance in XR (extended reality), which includes both Virtual Reality (VR) and Augmented Reality (AR), is a rapidly growing field of digital drama that sits at the...
Hands Up for Digital Humanities: The Beginnings of an Exposé
There was nowhere to park. As if it wasn’t daunting enough to throw myself into the alien world of tech-heads and program-people, now I was late. I found the Loft – a boutique ente...
A Writer's Guide to Metadata
Serendipity is the great unsung hero of publishing. We can never be sure of the precise value arising from chance encounters in bookshops, the flash of a good jacket catching the r...
Five Things I Learned from Episodic
There were a lot of things to like about the Episodic conference that took place in London in October. Run by the Storythings team, it featured a range of interesting speakers work...
Storytelling in 360° Sound: Audio Orchestrator
BBC Research and Development is the home of technological research and broadcast innovation at the BBC – behind innovations from Ceefax right up to modern day standards like UHD. O...