This last question lies at the heart of a project called Mapping the Music of Migration (MaMuMi), a two-year pan-European collaboration focused on music and the migration experience. Across Europe, migrants have been vilified and we wanted to combat this issue by finding a shared language, i.e. music.

Mobility and movement have long been central aspects of human life. People traverse national borders for complex and varied reasons, out of choice or necessity. War, poverty, economic downturns, love and retirement can all prompt displacement. There is no universal migration story, but the word ‘migrant’ narrows the narrative lens; it cuts out the lives prior to and after those journeys. It forces them into one, repeated across media platforms.

In the UK and abroad, we see tabloid media images of migrants in camps. We have seen footage of dead toddlers on Greek beaches. We hear stories about boats capsizing and people drowning in the Mediterranean. We know the numbers: 41 here, 43 there, more than 17,000 since 2015. UK politicians openly equate ‘illegal immigrants’ with terrorists. Those migrating to the UK face a hostile environment, their very status ‘as’ migrants denigrated. The constant reduction of their humanity to migrants results in racism, xenophobia, and segregation.

How do we change this narrative? How can we open up spaces where commonalities can be explored? We did this by using everyday technologies, in the form of mobile phones, to interview and record  participants talking about pieces of music. Using something so integral to people’s daily lives in this way engineered spaces that allowed people to speak about anything that the piece of music triggered in them. Putting them on a mobile app made them visible and audible to others.

At MaMuMi, we wanted to offer such spaces where we might share and discover those common stories. We knew from our previous research with NGOs across Europe that no one was using the method of talking about music to open up such a space. Trivial though that may seem, it is in fact hugely valuable. This is because two people may enjoy the same song, but have differing memories attached. This point of connection facilitates open discussion on grounds that are non-political / neutral. This is where we began to develop our app, which made these stories accessible to a wider audience.

The project’s seven partners are universities and NGOs working with migrants in Bulgaria, Cyprus, Greece, Italy, Norway, Spain and the UK. Between them, the project team have collected thirty anonymous stories recorded in refugee camps, offices, and over Zoom, in which migrants discuss a piece of music or song that they deeply associate with their journey. This track is then edited and interweaved with the music itself, into what the project call a ‘Song Story.’ These are then uploaded to the MaMuMi app, where they are represented by a pin placed on a map that spans the globe. It might be Iraq, Gambia or Italy. 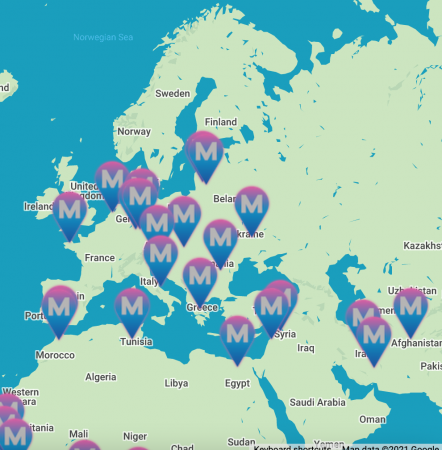 Selecting a pin will play a song-story, where users will begin tracing the speaker from origin to their journey into and/or across Europe, until at last they come to where they currently reside.  Their journeys see them from West Africa, overland to Libya, to Cyprus by boat. They move from Syria to a holding camp in Kos, they relocate from the North of England to Spain to retire and travel from Austria to Spain, for work, and from Greece to Cyprus for the same reason.

A myriad of narratives are represented here, some of which may relate a song with certain memories, others which remind the speaker of traditions lost. One participant who grew up in Morocco chose Bonnie Tyler’s Holding Out for a Hero, for example, which he listened to on repeat before taking and passing his UK driving test. Another participant, now working in Bulgaria, chose his own song, sung in his native Breton tongue. One young Syrian boy from a refugee camp in Kos described a song that exemplified the brutality he had been witness to, saying ‘I have sad and bad memories from this song, because when the youth of our area went out to protest, they thought that the policemen would not attack them, but they hung them and they killed them.’ Poignantly, the song named ‘Ya Hef’ (translation: ‘Shame on You’) is a baleful ballad about the Syrian civil war by Samih Choukeir, a renowned Syrian musician now living in exile in Paris. Likewise, another participant described the meeting of their Senegalese Griot musical heritage with the Norwegian educational system, where they now teach. Their song is about pancakes, a catchy pop tune that they have composed for the children they instruct. They tell us that ‘If you build a country, you have to [focus?] it to the young people. That’s why my focus, my music usually is for the young people, that’s why I make this song, Pannekake’. 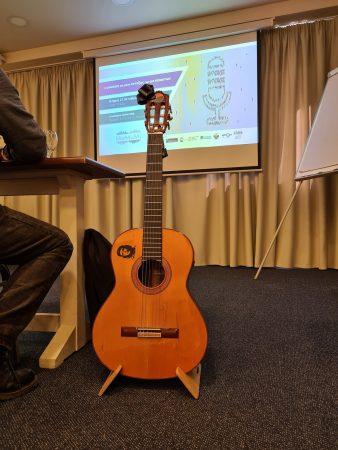 The range of narratives from our participants revealed stories that were both specific and common to many, and hearing them has facilitated conversations across cultures and borders. The pan-European team reported that the project had enhanced understanding of cultural diversity and awareness, and a sustainable set of resources (manual for NGO staff and migration app), which can be used for education and training. The project was also innovative in the sense that it gave the floor to migrants, refugees and asylum seekers (without a musical background) to make their stories visible to the public and their local community and raise multicultural awareness, fulfilling the MaMuMi mission. All of us on the project believed that engineering such a new space was necessary, and we hope it has gone some way to combating the harmful narratives surrounding migrants.

These participants have shared their stories of success, loss, frustration, memory and hope with us. We are not therapists, we cannot offer therapeutic spaces, but, using technology, we have opened up a place where stories can be told, heard and shared. And as these song stories get mapped onto our app, we offer alternative narratives of migration to those that dominate our news media.

More information and workshop methods can be found on our website: www.mamumi.eu

Professor Abigail Gardner is Professor of Cultural Studies at the University of Gloucestershire. She has published on music, gender and ageing and is writing Listening, Belonging and Memory (Bloomsbury 2023). Key publications include Ageing and Contemporary Female Musicians (2019), Aging and Popular Music in Europe (2019), PJ Harvey and Music Video Performance (2015) and Rock On: Women, Ageing and Popular Music (2012, with Ros Jennings). She is currently the PI on an Erasmus + European project called ‘Mapping the Music of Migration’ and produces short documentaries and lo-fi media.

The Challenge of Reading Ex Libris
In introducing my new novel, author Ryan O’Neill puts it most succinctly: This is an introduction to a novel you will never read. He adds hastily that he is referring not to the ...
Beyond the Book: The Middle
Paper Nations, a South West England-based creative writing incubator dedicated to diversity and innovation, has commissioned three writers with links to the region to develop excit...
Screenshots: The Cartographer's Confession
Screenshots is a regular feature by Simon Groth, highlighting a project, app, or other resource of interest. The Cartographer’s Confession By James Attlee The Cartograph...
The Digital Journey of RadioBook Rwanda
In the run up to the launch of RadioBook Rwanda in Rwanda’s capital, Kigali, the three young creatives behind the international publishing project reflect on the digital journey of...
What Right to Write These People?
The interior northwestern United States is remote: impenetrable mountains, untamed rivers, and disorienting prairies paired with unpredictable and extreme weather. Once an intricat...
Hands Up for Digital Humanities – Find the Gap
Welcome to the third article in this series where we’re dissecting the multifarious entity of Digital Humanities (DH). To understand the context and scope of this series, and to co...