2020  and 2021 have left all of us (except, perhaps, Elon Musk and Jeff Bezos) living with more uncertainty and vulnerability than we have allowed ourselves to admit previously. Like many, I have the very strong sense that a veil has been lifted, and we are in the midst of a series of societal reckonings that reveal how broken many of the systems we rely on are and that change is needed on a large scale. In 2014, I wrote two pieces about transmedia storytelling and activism for The Writing Platform. One outlined the form and processes and one put forward some examples of projects I thought were especially inspiring and innovative. Over the past seven years, technology has advanced exponentially and profound social movements have emerged across the globe. It feels like time to revisit the role and relevance of transmedia storytelling in activism, advocacy and social change, and to consider the ways traditionally under-represented cohorts have innovated the form of transmedia storytelling to create inclusive stories to agitate for change.

An often overlooked aspect of transmedia storytelling that is most potent is its capacity to illuminate the relationships between people, places and practices that can influence social change, which is precisely what creators and activists have continued to strive to harness in projects. As we grapple with issues of representation of under-represented groups and environments across all forms of media, the question of how transmedia storytelling can continue to evolve in ways that are inclusive and ethical continues to be relevant. One of the issues that could hold transmedia back is that still so little of what is written about transmedia explores the subjects, the content of the stories, the place and the purpose of the story. The focus continues to be the purpose of the platform, the design or the fan interaction, rather than the purpose of the story itself: who is the story about and who is telling it? Why are they telling this story and where are they telling it from? Do the media and platforms chosen reveal new aspects of the story? Are they authentic and meaningful for the subjects and creators of the story? Does place, not simply location, contribute something profound to the story? Is the story being told from the outside, about someone else? Or is it one of the rare stories that is told from inside a place, rather than about the people whose story it is? What unique contributions can transmedia make to the futures of storytelling?

We cannot afford to continue tinkering around the edges. With that in mind, I reviewed the projects I presented as examples in 2014 and sought out new examples. What became clear is that place has become a central element to successfully crafting stories that might just be able to shift our perspectives. How place might be used and embedded in transmedia storytelling requires other ways of thinking about storytelling which are not necessarily common in the fields that currently inform transmedia storytelling, such as media studies, games studies, narratology or film studies. As an element of transmedia storytelling, place is best understood through the lived experiences of those who inhabit it.

The interactive, transmedia project Hollow, from 2013, continues to exemplify what is possible in transmedia storytelling to promote social change and was an early leader of how to centre place and voice in the story. The multiple methods that are deployed to create the environment in which the project is set are examples of not only the impact that attention to cultural, physical and economic environment can have on non-fiction projects, but also the consideration of how particular media and platforms can be used to best portray particular aspects of that world. Perhaps the greatest achievement of Hollow is the ways it has captured the ‘feel’ of McDowell County while also telling a universal story. At the centre of the project are around 30 stories made about and by the residents of McDowell, using video, stills, text and voiceover that are reminiscent of traditional digital stories. McMillion claims that ‘the stories are encountered within this landscape so that the people featured emerge from a context of place and community’ (Rose, Mandy. 2013 “American futures: Hollow & question bridge” Collabdocs, July 1).

This approach is also used in the current outstanding transmedia story Neo Learning created between 2010 and 2020 by Big hART.  Big hART is an Australian arts media and social change company that works intensively in marginalised communities to co-create multifaceted arts events that reflect the stories and the creativity of the participants, and raises awareness about the urgent social issues facing these communities. Both Hollow and NEO-Learning are multi-year projects that relied on multiple media and forms to extensively represent communities and to connect with as large an audience as possible. These projects foreground story and the lived experiences and expertise of the communities as the cohering element. Further, all aspects of the projects and Hollow and NEO-Learning privileged the communities ahead of audiences. Instead of asking what audiences want to see, they asked the communities what was not being amplified or shared about them? What counter-narratives were there to the dominant stories about these places and the people who call it home? What frameworks needed to be used to facilitate the community being able to lead the storytelling? 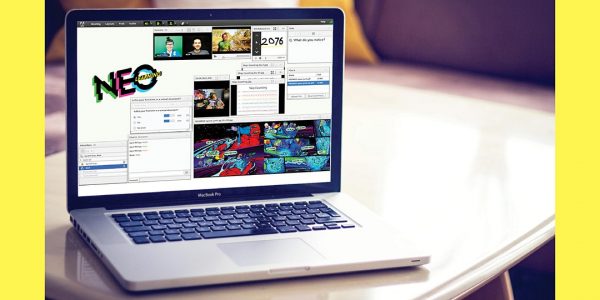 NEO-Learning is many things – storytelling, a learning resource, comic, a platform, training, an expression of culture, a reclaiming of place, and an imagining of futures. It is one big project, with discrete parts that can be enjoyed (by audiences, creators and community) on their own but has a particular purpose as a large project. There are a number of elements that make up the NEO-Learning project: NEOMAD comic, Future Dreaming VR film and the educational platform for teachers. NEO-Learning as a suite of educational tools began development in 2018, but was preceded and inspired by the award-winning sci-fi comic NEOMAD, also created in collaboration with Big hart. The NEOMAD comic was co-created with over 40 young people in the Roebourne community, through workshops in scriptwriting, literacy, Photoshop, filmmaking and sound recording. 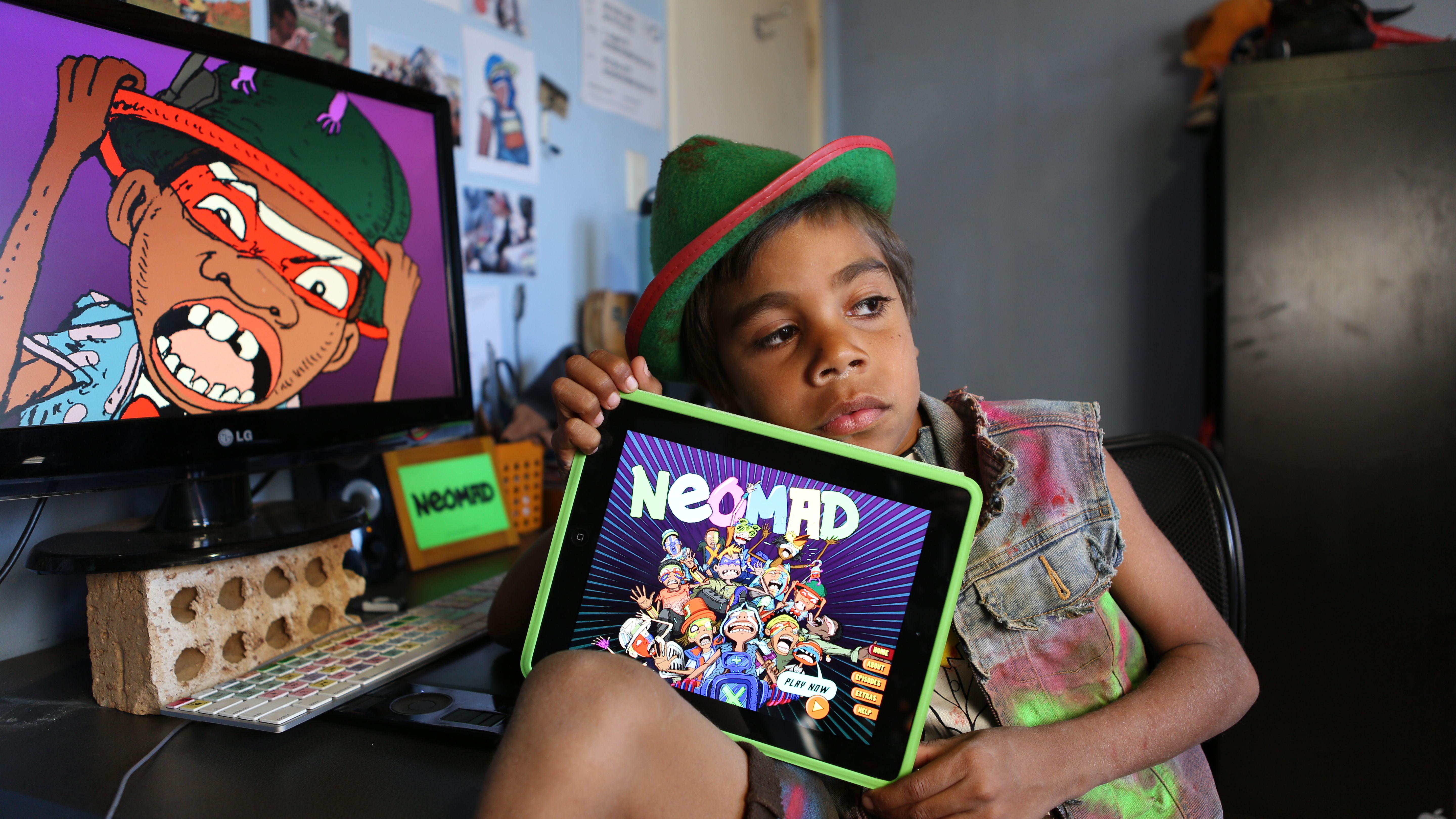 The result is an entirely original and innovative view of Indigenous young people, who are so often represented across the commercial media in Australia in negative and racist ways. As a transmedia project, NEO-Learning is a tantalising glimpse of what is possible:

As an educational tool, it is focused on what non-Indigenous Australians can learn and benefit from Indigenous culture and people and is grounded in strength rather than focusing on any challenges the community may face. The community owns the project, and it is about how they see themselves and what they want to communicate about themselves in the ways they want to communicate.

Our world is made up of stories, and transmedia storytelling has a real and important role to play in creating a world that is made up of different stories, because it has become frighteningly clear that the same old stories, the same old voices and the same old ways of communicating have little to offer when the world falls apart.

Donna Hancox is an Associate Professor in the School of Creative Practice at Queensland University of Technology in Brisbane. Her research is focussed on transformative creative practice and social impact, particularly the role of stories and creative technology in supporting healthy and inclusive communities.

Story Above All Else: Story+ 2014
Story+ is a two-day event at Brisbane Writers Festival which explores the intersection of story, narrative, technology and design. This year the one theme that consistently emerged...
The Book as Recombinant Structure: A Century of Art and Experimental Books
The following is an excerpt from Amaranth Borsuk's The Book, part of the 'Essential Knowledge' Series from MIT Press. This chapter explores the various ways writers and artists for...
Where Is The Bird? - A Story of Augmenting Reality
Where Is The Bird? is the first augmented reality storybook to promote British Sign Language as a language for deaf and hearing children alike. Combining animated Augmented Reality...
MIX 2023: Call for presentations and papers
7 July, 2023 at the British Library, London Plus an optional afternoon tea and tour of the Digital Storytelling with the exhibition's curators on 6 July, 2023 MIX 2023, t...
Love Letters - Performance, Creative Technologies, Audience Participation
"[...] the special dialectic of the love letter, both blank (encoded) and expressive (charged with longing to signify desire)" (Barthes, p. 157) I am a performance practitioner an...
Lilian's Spell Book - My Wattpad Novel
I have tried again and again to become another person. I have spent years trying to think my way into different people’s heads, language, rhythms. These people have sometimes been ...