Shortlisted for the QUT Digital Literature Award, Core Values is a response to the iconic Australian poem My Country, by Dorothea Mackellar. Updating the original text, it uses technology to not only animate language but transform the experience of the poem itself. The formality of the original poem is replicated, but also cut apart and interspersed with dehumanising jargon, map coordinates, GIS data, and technobabble made to scroll endlessly within a three-dimensional box, lined by historical maps of the nation. 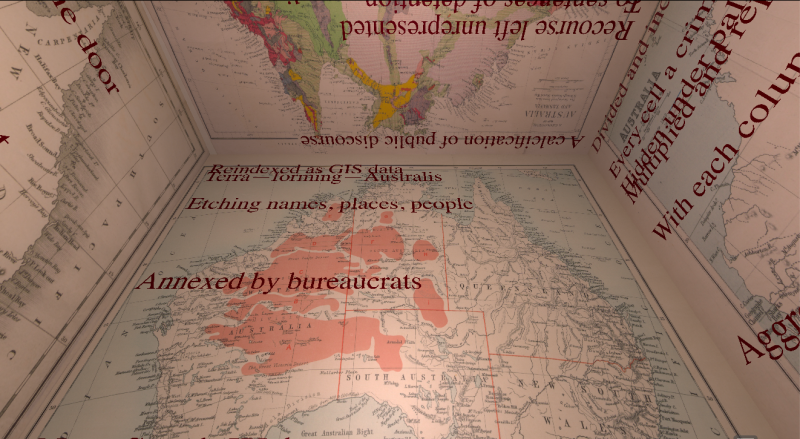 It’s a poem and a representation of an Australia in which you are quite literally trapped, a prison. The poem’s ‘stereoscopic mode’ for viewing in a simple VR device only accentuates the feeling of being closed in, a confronting and powerful match between text and technology.

7 Mistakes Self-Published Authors Make
The book publishing industry is going through a huge transition. It’s easier than ever to get a book out into the world. All the resources you need to publish a book are available ...
Labyrinths, Redstones and a Chicken Called Ted: Bursary 2015, Diary 4
Victoria Bennett and Adam Clarke form one of two teams we are supporting through the 2015 Writing Platform Bursary Programme, in association with Creative Writing at Bath Spa Unive...
Copyright Could Save Your Life
Books aren't sold by weight. Creative work is intangible – it doesn’t have real mass – and society deals with that problem with the concept of copyright. It's a common word, but mo...
Dare to Write? Atlas
Today, creative writing incubator Paper Nations launches the Dare to Write? Atlas, the latest portal on their creative writing platform, Dare to Write?. The Atlas is designed to he...
The Benefits Of Crowdfunding For Authors
Crowdfunding enables entrepreneurs and business savvy creatives to launch their projects or ideas with the help of financial backing from the crowd. Though crowdfunding is a relati...
Please touch this...
This article has been adapted from a talk delivered at the Pervasive Media Studio in Bristol (26/10/18), as part of the Friday lunchtime open talk series. This book...