Have you ever felt your skin prick up as you walked into a foreign environment? Throughout my life there have been times where I’ve entered an unknown venue, be it when exploring the world as a solo traveller, or starting a new job. The mixture of excitement and anxiety that I’ve associated with an entry into the unknown has been a full body experience, reflected in the pores of my skin and in the heat pulsing through my limbs.

I reflected on this phenomenon after my somewhat recent experience of Tender Claws’ The Under Presents, which is described by its makers as ‘an intriguing multiplayer experience set between two worlds’. Others might describe it as a clever and mysterious VR game that affords the user six degrees of freedom. 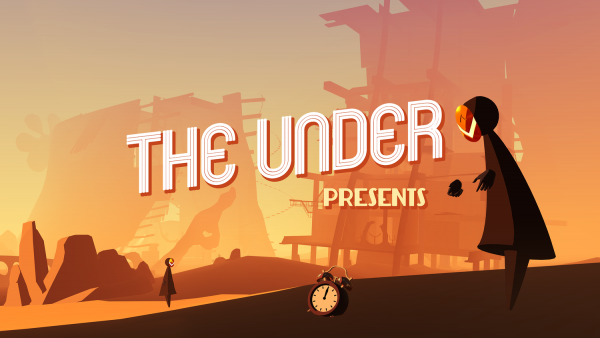 First activating the free demo version of this experience in the Oculus Quest, I found myself in a dark and waterlogged wasteland, with little idea of what to expect. I edged towards the ruins of a nightclub from which muffled music exuded. After several moments of uncertainty, a mysterious guide appeared and shepherded me into the building. I was followed into a room full of doors by masked figures in black capes. After some moments, I realised that their strange actions were actually a replay of my own awkward explorations of the space moments earlier. Past and present collided, giving me an uncanny insight into my own behaviour. As with the ‘real world’ experience described above, I felt acutely aware of my own body in this unknown virtual environment.

After much experimentation, I managed to access the depths of the nightclub at the heart of The Under Presents, where a number of other black hooded spectators milled about, enjoying the on-stage entertainment. Are these real people like me, I wondered? It certainly seemed a possibility. Like me, the other guests clumsily engaged in creating and eating food while exploring the environment. One hooded figure handed me a keyboard guitar before scurrying towards an exit.

Unfortunately for me, I came to this VR experience somewhat late. It’s notable that earlier iterations of The Under Presents saw live actors teleported into the multiplayer experience to interact with users in what could be described as virtual live immersive theatre. A quick scan of the reviews of the project on the Oculus website reveals the novelty of this spontaneous and communal experience. A video on Tender Claw’s website outlines the innovative interface that allows actors to enter into the VR experience, choosing their appearance and powers that they can utilise to interact with players, so as to enhance the narrative experience.

The affective nature of video games featuring navigable 3D environments has been explored by a number of scholars (Crick, 2011; Klevjer, 2012; Scriven, 2018). This comes after significant work interrogating the way that cinema ‘moves’ and ‘touches’ us on a bodily level (Marks, 1996; Shaviro, 1994; Sobchack, 2004; Williams, 1999). Klevjer describes how video games extend our bodies into the screen space:

When we play, because the avatar extends the body rather than pure agency or subjectivity, screen space becomes a world that we are subjected to, a place we inhabit and where we struggle for survival. We learn to intuitively judge, like we do in the real world, the opportunities and dangers of the environment. Klevjer, 2012, p. 13

This quote resonates with my experience of The Under Presents, where I slowly learned the rules of the virtual world, thus enabling me to progress through the experience. In doing so, I had to embrace ‘unknowing’, meaning I had to come to terms with my vulnerability as a virtual body in a foreign environment. I was never quite clear on where I was located or where I was headed, but in retrospect, this was half the fun.

In recent years, emerging scholarship has probed the specificity of narrative VR experiences in terms of spectator positioning, presence and/or embodiment (for example, Dooley, 2021; Nicolae, 2018; Vosmeer & Schouten, 2017). The bulk of this work is concerned with cinematic virtual reality rather than more interactive VR experiences with narratives that are emergent or open-ended. I would suggest that The Under Presents offers a case study of a narrative experience that successfully draws upon immersive theatre and video game conventions, as well as cinematic tropes, giving rise to a unique embodied experience that is about ‘story making’ rather than ‘story telling’. The computer-generated story world provides a playground for multiplayer interaction, but the mystery of a stranded ship (the ‘time boat’) sits at the heart of the narrative experience. The limits of the game seem linked to the user’s tolerance for learning the rules of the world; in other words, there are seemingly endless threads to explore, if one takes the time to uncover them.

My enjoyment of The Under Presents makes me think that the notion of embracing ‘unknowing’ is an apt one for VR creators as well as audiences. In the past, I’ve written about the need for creators to guide the viewer through a narrative VR experience, creating attention cues and allowing time for exploration and acclimatisation. As described above, the makers of The Under Presents adopted these techniques to some degree. However, I’d argue that the experience’s frequent lack of signposting and foreshadowing fosters a sense of uncertainty and intrigue that increases rather than decreases engagement. Maybe this is what great VR storytelling is all about – creating an affective experience that allows the user to ‘live’ the story while navigating unfamiliar territory.

Postscript: The Under Presents is once again featuring live actors in the environment in the month of April 2022, so this is a good time to visit or revisit the experience!

Klevjer, R. 2012. ‘Enter the avatar: The phenomenology of prosthetic telepresence in computer games’. In The philosophy of computer games (pp. 17-38). Springer, Dordrecht.

Marks, L. U. 1996. The skin of the film: experimental cinema and intercultural experience. University of Rochester.

Vosmeer, M., & Schouten, B. 2017, June. ‘Project Orpheus: a research study into 360 cinematic VR’. In Proceedings of the 2017 ACM International Conference on Interactive Experiences for TV and Online Video (pp. 85-90).

Williams, L. 1999. Hard Core: Power, Pleasure, and the” frenzy of the Visible”. Univ of California Press.

Associate Professor Kath Dooley is a filmmaker and academic based at the University of South Australia. Her work as writer/director has screened at events such the Edinburgh International Film Festival and FIVARS, Toronto. Kath is author of Cinematic Virtual Reality- A Critical Study of 21st Century Approaches and Practices (Palgrave Macmillan, 2021) and co-editor of The Palgrave Handbook of Screen Production (2019). Her research interests include screen production methodology for traditional and immersive media, screenwriting, screen education and diversity in the screen industries.

Landing Gear Online
In 2001 I read an article in the Guardian newspaper that told the story of a body landing in a supermarket car park in southwest London. Two investigative journalists tracked down ...
Locating Digital Fiction in Victorian Southampton
Late last year, whilst in the final throes of my doctorate in Creative Writing, I was invited by my supervisor at the University of Southampton to join an interdisciplinary Leverhu...
Words: Foundation Bricks in a Media Warehouse
The creation, presentation and publication of new creative work has been a core element of undergraduate teaching programs at Queensland University of Technology for over four deca...
Screenshots: Our Cupidity Coda
Screenshots is a regular feature by Simon Groth, highlighting a project, app, or other resource of interest. Our Cupidity Coda by Mez Breeze To read through the text o...
Invisible Islands - It's a Wrap: Diary Entry #5, Bursary 2013
The Writing Platform bursaries have come to a close. We caught up with Laura Grace and Caden Lovelace, creators of Invisible Islands. Caden and Laura applied for The Writing Platfo...
The Making of a 100-year poem
For the past two years I have been working on Arctica, an interdisciplinary art project encompassing poetry, photography, visual art, performance, film, artist’s books and a digita...