Too often, education programs are expensive, hierarchical, lonely, and not particularly relevant to what people want to learn. However, it doesn’t have to be this way. In 2009, Peer 2 Peer University was founded as a non-profit organization with the aim of creating empowering and fun learning experiences online. For five years, P2PU helped organizations design and run online learning communities. This went well, but there were limits to what could be accomplished by working explicitly in a digital world. In 2014, P2PU partnered with Chicago Public Library to develop a program called learning circles, in which librarians would use online courses to facilitate in-person learning experiences. Four years later, there have been more than 3,000 learning circle meetings in libraries and community spaces across North America, East Africa, and Europe.

In a learning circle, a group of people meets for about two hours per week for 6-8 weeks in a public space, such as a library, to work through a free, online course together. This course can be in anything: popular topics include web design, public speaking, entrepreneurship, and English language learning. Many of these online courses are free, but not openly-licensed. This can be an important distinction for a number of reasons, not least of which because a copywritten course can be removed from the internet at any time and there is nothing you can do about it.

Jordan Draves faced this very issue in the summer of 2017, when she was trying to facilitate a learning circle about creative writing at the Boston Public Library. Jordan works at the Central Library in Boston’s Back Bay neighborhood, which is both the largest library in the system and the headquarters of the 24 branch libraries. A 2016 renovation of the Central Library saw an increase in public and collaborative space, adding a cafe, a business innovation center, and even a public radio broadcasting station. With the renovation, BPL hoped to see more face-to-face learning happening, and the Library became interested in learning circles.

Jordan was just weeks from hosting her first learning circle meeting, when she found out that the fiction writing course she chose was taken offline by the provider. Since Jordan had already promoted the learning circle and attracted the interest of many library patrons, she didn’t want to cancel the course. Instead, Jordan spent the following few weeks putting together her own open online course, using her personal writing Pinterest board as a starting point. “If the articles on Pinterest could help me, why couldn’t I use them to help other writers?”, she thought. Within a few weeks, Jordan put together an eight-week introduction to fiction writing class and hosted it on WordPress. Each week has its own topic, with readings and activities to do both independently during the week and together during the learning circle.

The P2PU model is clear that facilitators should not be acting as content experts, even if they are knowledgeable about the material. While Jordan certainly has a good deal of background in creative writing, she made it clear to her participants from early on that she was not the be all and end all of writing expertise. “I was upfront with the participants”, she says, “about the fact that I’d created the course in a month and that there were things we could change about the course if participants had any ideas about how to improve them. 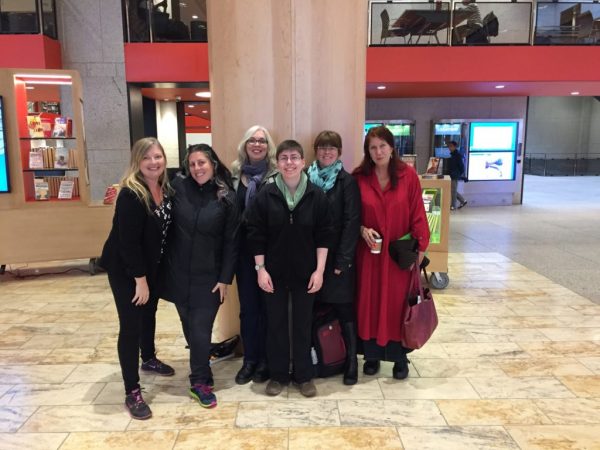 By the second week, participants said that they wanted to do a group activity together to help get them in the mood to write. Jordan added this to the class routine and it seemed to work great. One participant wrote in her reflections that the learning circle was perfect, with “lots of independent, thought-provoking assignments to help us flesh out our characters and their universe, and just enough in-person collaboration with the other participants. The ice-breakers at the beginning helped us to bond as a group. I’d recommend this format to adult learners who can give and take constructive feedback.” Another participant added that the learning circle was a good balance between practice and reflection. She writes, “The readings gave me the opportunity to think about aspects of the craft, and the writing exercises and class discussion allowed me to both practice and gain valuable feedback. This format is very useful for learners who are comfortable giving and receiving constructive feedback. I am working on applying what I learned to my current projects!”

Soon after completing the learning circle, participants started asking Jordan for more. She pulled together a follow up course about world building in early 2018 and has just finished a course called “Learn To Write Fiction: Writing a Series” in December, 2018. In 2019, she’ll be working on a new course about editing.

Since P2PU is a global community, this means that other facilitators around the world have been able to find and use Jordan’s courses. Her introductory course has already been facilitated by librarians in Tampa, Florida and Wichita, Kansas. All of Jordan’s courses and additional material are all available at Learn To Write Fiction. We would love to see more groups of writers around the world gather together using the learning circle model and Jordan’s courses. To get started, head to Peer 2 Peer University.

Jordan Draves has been a librarian at the Boston Public Library since 2008, who enjoys recommending good books to patrons and facilitating writing classes at the library.  Grif Peterson serves as the executive director for Peer 2 Peer University, where he has worked since 2015. He lives in Cambridge, Massachusetts. On twitter @grifpeterson.

Hands Up for Digital Humanities – When Humanists Go Off-Piste
Welcome to the fourth article in this series where we’re dissecting the multifarious entity of Digital Humanities (DH). To understand the context and scope of this series, and to c...
Everyday Stories and Creativity: Regional Queensland and Transformative Technology
Australia is a big country. Queensland is a big state in a big country, one that is particularly geographically dispersed and politically fractured. It is also home to some of the ...
Beyond the Book: The Beginning
Paper Nations, a South West England-based creative writing incubator dedicated to diversity and innovation, has commissioned three writers with links to the region to develop excit...
Reading on a Revolving Path
I set out to make ‘A dictionary of the revolution’ in 2013. I planned to record conversations with different people, asking them to define words I heard people using to talk about ...
Screenshots: The Library of Last Resort
Screenshots is a regular feature by Simon Groth, highlighting a project, app, or other resource of interest. The Library of Last Resort by Matt Finch The Library of Last...
Leaving Space at the Table
Democracy is starting to feel uncomfortable. In 2016, we saw the rise of the ‘silent majority’ with Trump, Brexit, and the return of One Nation. In the most recent Australian elect...