When writers discuss plot and pacing in narrative craft, especially in creative writing classes, we often talk about the curve of stories, the rise and fall in tension that characterises the most common story structures. Now usually, at least in my experience, that curve is not something a writer actively thinks about while composing a work. It’s more instinctive. Manipulating pace is one of the writer’s primary tricks in taking a simple sequence of events and turning them into narrative. But what in retrospect looks deliberate and disciplined, is in the act of writing more like manipulating the feel of the story as you go.

When it came to my current publishing project, all that instinct counted for nothing. An experiment in recombinant narrative structure requires careful consideration and active manipulation of the curve.

Ex Libris is a novel containing twelve chapters that can be shuffled in any order, yet always presents as a cohesive narrative arc. It is being published in a print run that randomises the chapters between each copy. With close to half a billion possible combinations, each copy will contain a unique version of the text, yet all will tell the same story. 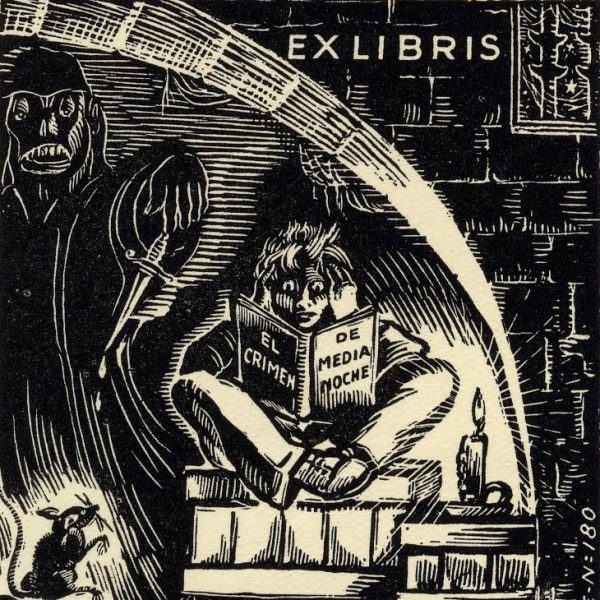 The title for ‘Ex Libris’ comes from the nineteenth century fad for bookplates.

The two books that, more than any others, inspired the structure of Ex Libris are The Unfortunates by B. S. Johnson and Tristano by Nanni Balestrini. Curiously, both were written in the 1960s, though Tristano wouldn’t find its true form until 2007.

The Unfortunates is a beautiful but restless story about grief and the intrusion of memories that overlay the banality of daily life. The novel was structured with a fixed opening and closing and with freely fluid chapters between. The first edition and its more recent reproduction was published as chapter-length booklets contained in a box, which the reader was free to arrange in whatever order they desired.

Balestrini envisaged Tristano as a standard bound work with content that was randomised between copies. Sound familiar? The author was unable to realise the work as intended until forty years after its initial publication and with the advent of digital-based print technology. As the title suggests, Tristano builds its text using Tristan and Isolde as scaffold, which frees Balestrini to desiccate the narrative into the smallest of fragments, hints of meaning that only ever briefly come into focus.

Both works experiment boldly, not just with structure, but also with the language itself. The result is intoxicating: as a reader you feel like you’re having fun, even as you stumble around the text, constantly trying to find your footing. Tristano is one of the best examples of what I call ‘narrative drift’, the sense that, as a reader, you must let go of any sense of structure or meaning and allow the pages to take you wherever they lead. The Unfortunates is more focused, a narrative that initially drifts, but tightens as more of its pieces fall into place.

When I began writing what would become Ex Libris, I didn’t have a particular structure or publishing method in mind. What I wanted to do was write a work with fluid text without sacrificing a reader’s sense of plot or narrative arc.

I started with much more complicated mechanics and elaborate concoctions of fixed and fluid chapters. I ground my way through three drafts of the story, never completely satisfied, trying to find some magic key that would unlock how the story should work.

Eventually, I abandoned these versions of the story altogether. After a break from the manuscript, I returned and found myself back at first principles. Finally, I contemplated the curve.

I created a storyboard of sorts in Scriviner—movable lists in dot points—obstinately refusing to write anything resembling finished prose until a supporting structure had been mapped in sufficient detail. Slowly, a new structure began to take shape. The story begins in media res, at the beginning of the climax. Then it backtracks. It fills in details and circumstances that led directly to the opening scene. Then it jumps to the rest of the climax and conclusion. This means Ex Libris, like Johnson’s The Unfortunates, opens and closes with fixed chapters that frame the narrative. I had hoped not to invite such direct comparisons with Johnson, since clearly I would come off a distant second best. But the structure he pioneered, with its parallels to classic storytelling technique, is compelling in its simplicity.

Beyond the framing device, the fluid or recombinant chapters in Ex Libris primarily concern themselves with exploring character and world. These chapters exist in a weird state of semi-independence. A fluid chapter is episodic, with its own miniature arc. It cannot rely on prior knowledge. That doesn’t make it a short story. Although it shares traits with the short story form, a fluid chapter’s raison d’etre is to contribute to a greater whole. Detached from their surroundings and the framing of the novel, these little stories might struggle to pass a ‘so what?’ test.

Story and the structure developed in tandem. Part dystopia, part satire, with doses of paranoia and farce, and a self-reflexive bent, the novel is set in a hyper-networked surveillance state that has abandoned and almost forgotten the book. It focuses on a small band of subversives who collect the fragments and scraps of stories left behind. Calling themselves the ‘free readers’, they are attempting to rebuild a grand library they know must have once existed. A fragmented book about fragmented books, Ex Libris both feeds off and contributes to its own structure, a virtuous cycle of knowing winks. 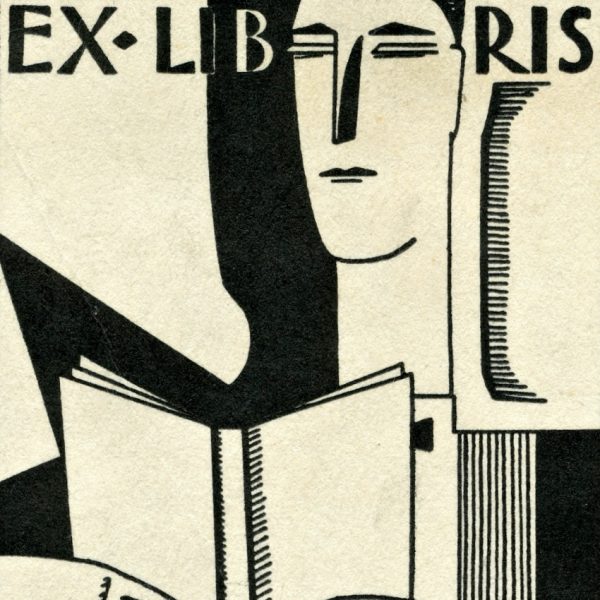 I was very conscious of the reader’s experience.

I was very conscious of the reader’s experience, signposting and orienting the text at every opportunity to counter and minimise the sense of narrative drift. I maintained strict upper and lower word limits for each chapter. Too long indicated waffle that needed to be broken up. Too short pointed to a lack of substance. Often throughout the long planning stage of the project, I would stare at a dot-point breakdown for a chapter and think ‘but where’s the story?’.

I also avoided working on chapters in any particular order. Instead, I jumped around. From its initial use as a storyboard, Scrivener became a kind of reference tool as I wrote, a way to maintain a wide-angle view of the story, while moving the chapters around. The texts themselves were composed in separate documents, organised by character name and working title. Early printouts were separated into chapters, each one held together with a bulldog clip, so that I could shuffle and reshuffle while reading.

When I finally created the first complete manuscript, I used a random number generator and manually combined the chapters into a single file. I’ve never considered putting together a preferred or canonical order. The thought of it seems a bit…wrong to me. The chronology of the story can be reconstructed in part—some events clearly happen before others—but a grand overarching chronology would be impossible to determine. That’s not how this story works.

At the end of an exhaustive process, I wasn’t sure if I’d succeeded. It wasn’t until the first feedback from beta readers (each of them with their own unique random shuffle) that I suspected maybe this was working as intended. A good indication was that some of these early readers did their own reshuffling to see if I had cheated.

The long process of conceiving, planning, and writing Ex Libris has led me to a different way of thinking about raising tension in a narrative arc. The behaviour of the characters introduced in the opening sequences is gradually becomes clearer as their background is revealed. It doesn’t matter in what order those revelations happen.

The best analogy I’ve found is that it’s like a jigsaw puzzle. The order in which you place the pieces doesn’t change the final picture, but it does change how you experience the journey towards it. Adjacent chapters might flow or they might juxtapose. A character might disappear from the story for a while. A particular piece of key knowledge might be revealed earlier or later. The story has a different rhythm between copies. If the traditional narrative arc is the linear curve, this is more two-dimensional.

So does it work? That remains my burning question as I finalise editing and prepare to publish. It’s impossible to speak for every possible combination. There are 479,001,600 of them so I can’t check. It’s something every individual reader will have to determine on their own based on the version of the text they receive. I’ve always hoped that the story might be good enough to transcend its construction. I imagine a reader happening across a copy of Ex Libris, with no prior knowledge of its creation, who will read from cover to cover and enjoy it.

Is that even possible? I guess we’ll see.

The crowdfunding campaign to publish Ex Libris is live until 25 November 2019.

Are Creative Writing Courses Worth It?
Are creative writing courses a "waste of time" as author Hanif Kureishi stated earlier this year? Or are they a good way for writers to develop and hone their craft? In this podca...
New Media Writing Prize: the First Eight Years
Beginnings and developments In 2010 when we began this adventure into new forms of writing, we had no real idea what we would receive as entries. A colleague of mi...
MIX 2019: Experiential Storytelling at Corsham Court
I first went to MIX in July 2013. It was the second MIX and the first conference I had ever attended. When I arrived, I stood at the bottom of Corsham Court’s long driveway and...
Things Rarely Turn Out the Way I Intend Them To
A version of this illustrated article was given by J.R. Carpenter as a Keynote Address at the New Media Writing Prize Award Event at Bournemouth University in January 2017.  Thi...
Screenshots: All the Delicate Duplicates
Screenshots is a regular feature by Simon Groth, highlighting a project, app, or other resource of interest. All the Delicate Duplicates By Mez Breeze and Andy Campbell ...
Breathe – a digital ghost story
What happens when a story comes to you where you are reading? What new types of storytelling are made possible when narrative accesses technology to personalise itself to you? ...